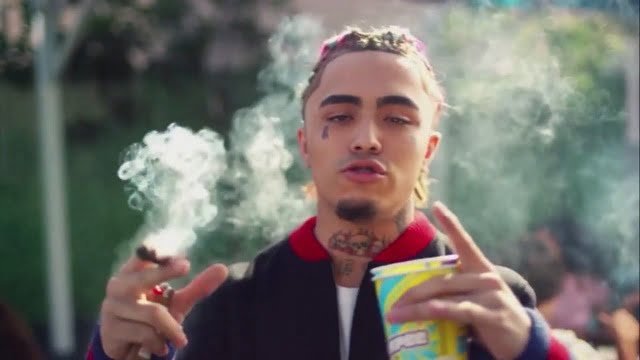 What if John Lennon sold crack to your nan? What if U2 engaged in sexual intercourse with your mother and then asked her to leave? What if Kendrick picked up a slab of Lurpak and slapped it across your brother’s face?

These are all things that Lil Pump says he has already done to our family members, and the controversy doesn’t stop there, so maybe we should delve deeper into some of Pump’s greatest lyrics…

With lyrics like:
“Lil Pump (effs) your mother” (Movin’),
“ (eff) on your sister // Nut on her lip, and then you gon’ kiss her” (Molly),
“I just (effed) your b*tch” (D Rose),
“we run through your daughter” (Crazy),
“prolly’ (eff) yo’ daughter ’cause she hella thottie” (Foreign),
And “Bustin’ all on your b*itch, wiped it off with my sweater (ooh!)” (Drug Addicts) to name a few, Pump makes it clear that he is going to sexually dominate the world’s families and relationships.

Not only has Lil Pimp been relentlessly ‘pumping’ our relatives, but he still finds the time to sell them drugs and assault them too. Now, not even the elderly generations are safe. Pump exclaims how he would make my “grandma do a backflip” using his “Uzi automatic” (At the Door), and how he gave my “momma crack” (Movin’) in multiple songs as “she a fiend” (Molly). All before he “rob(s) your brother (ooh) // Damn, slap(s) him with some butter” (Movin’).

Despite this, it is Pump’s glorification of drug-selling as a viable alternative to education that I find most interesting. From an early age, Pump was “poppin’ pills since (he) was seven (yeah, (he) was seven)” and “smokin’ since (he) was eleven (ooh, eleven)” (Drug Addicts); thus, he didn’t have any time for school due to his drug addiction and the subsequent habit of selling to fuel this habit. Pump boasts how he “never went to school ‘cause I was always flippin’ bricks // Damn, yeah I sold crack in the halls”. In case you initially misinterpreted Pump “flippin’ bricks” as the Lego bricks he probably owns, and most likely chews, he removes any doubt with the statement that he “sold crack” in his school halls. 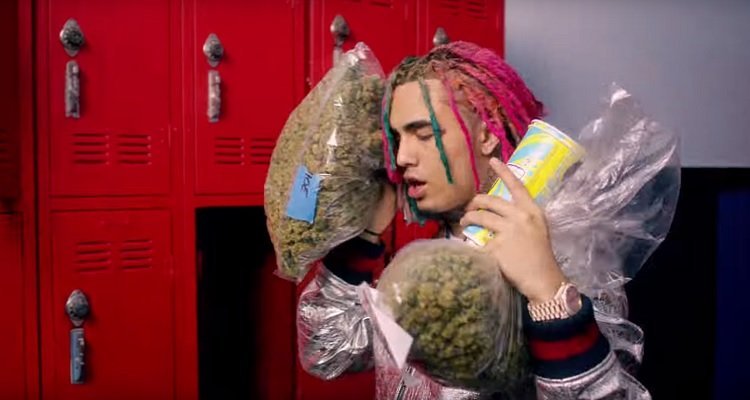 Merry Crackmas: Lil Pump brings his Santa sacks of drugs for all the kids to enjoy.

Aside from just admitting he committed a federal offence, something that most people would try to hide in their past, Lil Pump takes pride in selling crack and potentially even samples it himself, as it could be one of the many logical reasons why “If the teacher give me homework, I’ma cut her (I don’t know)” (Movin’). Pump hates school so much that at the suggestion of learning his times tables he’s willing to stab his teacher and go peddle crack in the halls, and, well, it clearly works as he’s “a drug addict” and still “richer than my professor (man, fuck school)” (Drug Addicts) despite the fact he “ain’t never had a job (nah)” (Esskeetit).

What’s more disturbing than hearing him exalt his love of Lil Pumpin’ drugs into his veins or selling Lil Bumps of crack cocaine to kiddies in the halls, is Pump’s constant Tourette-like tendency to violently shout a spasmodic phrase at the end of every line. Whether it be “(ooh, Molly!)” (Drug Addicts), “(I don’t know)” (Movin’), or a simple “(huh?!)” (Gucci Gang), Pump never fails to shriek an enthusiastic, yet confused phrase after each sentence; most probably, due to the assortment of drugs coursing through his system (Oh God Damn!). Not only have the drugs damaged his ability to not inform the police of his many criminal offences old and new (e.g. “Lil Pump still sell that meth” (Gucci Gang)), but they’ve also clearly provided him with brain damage as he aggressively slurs through his emphatic interjections between each line.

It may seem like I hate Lil Pump for it, but I don’t entirely. Lennon calmly probed for the end of war and famine in ‘Imagine’ (1971); and Kendrick used his album ‘To Pimp a Butterfly’ to address concerns of racial persecution and the struggles of the black community in America; but both Pump and his “grandma take meds, ooh” (Gucci Gang), and I believe that this humour is something that is not only allowed but is required, no matter how sad it is, in order to bring some variety and light to a culture that could be all doom and gloom.

By no means am I favouring the works of Pump to the intelligent and political works of artists that try to make their lyrics mean more than just repetitions used to remain in the heads of the populace for a quick buck. Nor am I suggesting that promoting the sale and use of drugs, or the sexual devastation of millions of families, is acceptable. I am merely saying that in life people are different, and laughter is needed to break the monotony of seriousness from time to time, and what better way to do that than laugh at the fun and stupid approach to rap that a rainbow-dreaded, face-tatted imbecile can bring to you. Yes, his lyrics are ridiculous and promote the wrong values, but the chance that everyone who listens to his music is going to start popping “a lot of molly for (their) breakfast (ooh, Molly!)” is almost zero. I mean even Lennon swore and countless other artists have extremely crude lyrics that are used in not as funny a way.

So, at the end of the day, enjoy it for its hilarious superficiality and don’t hate his stupidity too much as he’s already around the back of your house selling crack to your mum.