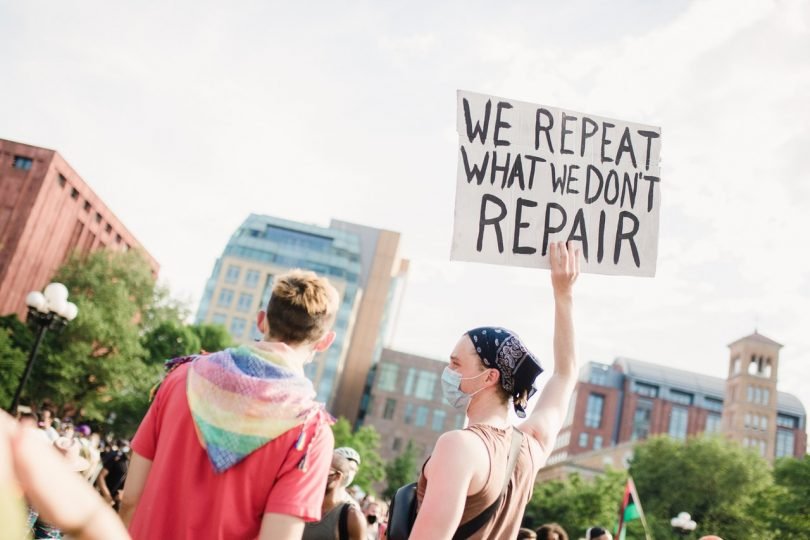 For many of us white people, the death of George Floyd was not only despicably shocking, but it was also a true wake-up call, forcing us to take notice of the fear and hardship that many BIPOC people face on a daily basis. This is not only in terms of extreme racism, such as shootings and police brutality, but also of the ways that we ourselves can be racist. And of course, we are. We are raised in a society that is built from prioritising white people at the expense of everyone else, and it has been like this for decades. However, even though this fact is uncomfortable, or even painful for us to realise, something needs to be done about it. It has gone on for far too long for us not to. Here are 5 ways you can learn to be a better ally.

First of all, you might have seen online posts in support of George Floyd. You might have even put one or two of them on your Instagram story, or posted a black photo in support of Black Out Tuesday. However, if you’ve done those things, just to make yourself look like you are supporting the movement, instead of actually reading and educating yourself, that isn’t really the behaviour of an ally. Instead, we should always be reading, listening to podcasts and watching videos.

Things will never change, unless we’re willing to learn, so make sure you do just that.

It is easy to assume that to be racist, you have to behave in a very extreme and overt way. However, this isn’t true. Instead of racism being a binary concept, it is grey, and to a certain extent every white person is racist. We’ve been brought up where Disney princesses looked like us, we got taught history from white perspectives, and we grew up with beige crayons, that we learnt to refer to as ‘skin tone.’ As a result, holding our hands up and saying that there are parts of us that contribute to this is a humbling and necessary experience, and from doing so we should learn to be better, so future generations can take our lead.

Lean into your discomfort

Following on from accountability, it is only natural that you might be uncomfortable about learning that you are part of a racist community. You may even be feeling guilty or remorseful if you’ve behaved in a racist way in the past, either consciously or subconsciously. This guilt can have different ramifications for different people. Some might find themselves getting defensive and trying to explain themselves. Others might find the guilt all consuming. They might think they are a terrible person, who is no longer worthy of happiness. Neither of these reactions are productive, so instead of this, we should turn our discomfort into fuel to make a change. We need to learn from our mistakes to progress.

Listen to those around you

Whilst you shouldn’t assume it is up to the BIPOC community to educate you, some of your black friends may share their fears and anger with you about what is happening. When this happens it’s your duty to listen. Don’t tell them that they’re overreacting because they’re not. This has been going on for too long, and they have every right to be furious. So instead of not listening because it makes you uncomfortable, you should be listening and acting. It’s the best way to help.

Over the last two weeks the BLM movement has got less and less coverage on social media. However, don’t assume that this means that change has occurred, and racism has been eradicated because it hasn’t. Of course, it hasn’t. It’s existed for generations, so it won’t just disappear overnight. Because of this, it is everyone’s duty to keep learning, keep educating themselves and continuing to push back racism. If we do this, little by little we might find that change will come.