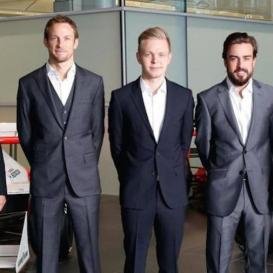 It’s no secret that over the past few seasons McLaren have been having a tough time of it. As a team they have always been very competitive, being the second oldest Formula 1 team after Ferrari. But perhaps being old is not so beneficial in contemporary racing where we’re seeing younger drivers emerging each year.

As a team they’ve had 182 race victories, 8 constructors championship titles and 12 drivers titles, no mean feat. But since the arrival of Sebastian Vettel to Red Bull in 2010 the team have struggled to secure the win with the Austrian team dominating the sport.

In 2013 McLaren’s car was simply not good enough. As driver Lewis Hamilton made the decision to move to Mercedes the team hired Sergio Perez to fill the Brit’s spot. The Mexican did well enough but the car was not competitive and McLaren finished the entire season without a podium finish, the first time since 1980.

It was disappointing to say the least. Into 2014 poor Perez was given the boot in favour of young rookie Dane Kevin Magnussen. Everything looked promising as, after Daniel Ricciardo was disqualified, he finished second and Jenson Button third in Australia, the first race of the season.

But once again these results could not hold with Mercedes this time proving the dominant team. It was another disappointing season for McLaren who have now cut ties with Mercedes and will be forming with Honda for the coming 2015 season.

For the last few months of the 2014 season there was much speculation about who would drive for McLaren the following year. News had broken that Vettel would be leaving Red Bull to move to Ferrari and it looked set for Fernando Alonso to make the move over to McLaren. But what would become of Jenson Button?

Button is a favourite amongst motorsport fans known not only for his sporting prowess but also his kind and friendly nature. He’s the kind of guy you would want to be friends with and throughout the paddock he is widely known as the nice guy. He has plenty of fans, many of whom have stuck with McLaren purely because of his presence within the team.

The 2014 season ended on 29th November with Hamilton crowned champion. But Button’s and Magnussen’s fates were yet to be decided. The obvious choice was to keep Button as a driver and move Magnussen into a reserve position, allowing him the chance to take a step back and review his time as a driver and learn from his debut season.

Fans were forced to wait for the decision. And wait again. Then wait some more.

Guys, we hear your feedback and will bring you news of our driver line-up as soon as a decision has been made.

It wasn’t until 11th December that McLaren finally announced that they had taken the decision to keep Button in his seat and move Magnussen to reserve, a decision that many thought could easily have been made weeks before.

McLaren have been incredibly lucky in the fact that they did decide to keep Button on as outcry would no doubt have been rife if they had waited so long only to turf him out of the team. Button has a lot in him yet and Magnussen has plenty of time to hone his skills and excel in driving in the future.

So why did McLaren feel the need to wait so long when in most minds the decision was so simple? The answer to that we will probably never know. But in this unnecessarily long winded process it is highly possible that McLaren have lost some of their good reputation.

They are clearly not the strong team that they once were and they’ll have to work incredibly hard to create a competitive car for 2015. After Mercedes have dominated this season there seems no real reason why they won’t continue their success into the next.

For McLaren now they have to work hard on their 2015 model and ensure that Alonso gels well into the team, as well as hope that their new relationship with Honda is a success. Taken at face value McLaren could no doubt be a strong team again but after the recent lengthy wait for a decision, poor treatment of both drivers and lack of points it is possible that the team may have lost some fans for good.

What do you make of the McLaren situation? Have your say in the comments below.