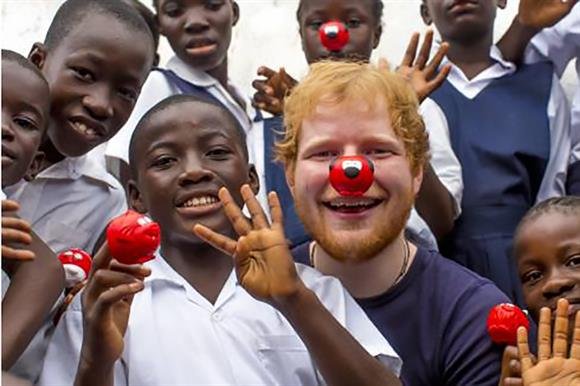 British broadcaster and documentary maker Stacey Dooley has faced criticism this week after posting a series of photos on Instagram from her recent trip to Uganda in association with Comic Relief. One of the most influential and public figures to criticise her has been the MP for Tottenham David Lammy arguing the world does not need any more white saviours.

This is not the first-time Comic Relief have faced criticism as other celebrities including Ed Sheeran, Tom Hardy and Eddie Redmayne have similarly come under fire in recent years for being part of ‘poverty porn’. During his trip to Liberia, Sheeran offered to pay for hotel rooms for children who were living on the streets leading an aid watchdog to brand the video ‘poverty tourism’. Although his intentions were good, it showed how out of touch western celebrities are with the struggles faced by millions of people around the world each day and how easy people think it is to solve the problems.

It is not surprising therefore this issue has re-emerged which it was always going to do. Even though it has been spoken about before, the conversations surrounding these harmful images have never been resolved and the charity sector has not changed accordingly. At the heart of Lammy’s criticism is by sending white affluent celebrities to Africa they are perpetuating an image reminiscent of colonialism where the white man (or in this case woman) travels to the continent to save black men, women and children who are incapable of saving themselves.

Hi @StaceyDooley. This isn't personal and I don't question your good motives. My problem with British celebrities being flown out by Comic Relief to make these films is that it sends a distorted image of Africa which perpetuates an old idea from the colonial era.

I wholeheartedly agree with this criticism. These images are incredibly dangerous for giving life to a narrative in which Africa is ‘backwards’ and struggles without European intervention. Even today, there are many in the western world who believe all of Africa is undeveloped, which is far from the truth. We live in a post-colonial world with the legacy of colonialism very much alive and so it shouldn’t be forgotten so easily.

Despite criticism about the photographs being valid, the personal attack on Stacey Dooley is unjustified. As I stated before, this conversation around the role of white celebrities in aid campaigns was always going to re-emerge and it just so happens to be reignited following her trip to Uganda. I am a huge fan of her work and have been fortunate enough to meet her in person at one of her events. I strongly believe there was no malicious intent behind her Instagram post and she genuinely believed she was making a good decision by travelling to Uganda to film for Comic Relief.

David, is the issue with me being white? (Genuine question) …because if that’s the case, you could always go over there and try raise awareness? Comic relief have raised over 1 billion pounds since they started.
I saw projects that were saving lives with the money. Kids lives. https://t.co/pPgez9OxN8

Where do we go from here?

So this leaves us with the question of where do we go from here? I hope this discussion will encourage Comic Relief and other charities to reflect on the manner in which they broadcast their media content. At the heart of the issue is the question of agency: in this instance and many others the agency and voices of African people are removed and silenced. To combat this, there are opportunities to include a more diverse range of people.

The work Comic Relief has done in tackling social issues in Africa has been incredible and I don’t think the role of the white western celebrity should be removed entirely as often it is their platforms that encourage many people in the UK to donate to such causes. What needs to happen instead, is greater representation and inclusivity. In light of this discussion surrounding Comic Relief this year, I hope next year we can look forward to Comic Relief taking on board the criticism it has faced to make charity films that better reflect the post-colonial world we live in.