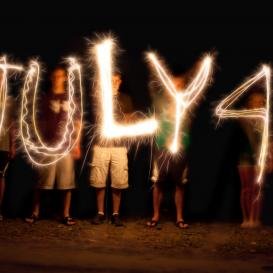 It’s Independence Day, the day on which in 1776, following the adoption of the Declaration of Independence, the US obtained independence from Great Britain. In those last 239 years the good old US of A has given us some great, and not so great, things.

To launch Kettlemags US Season, I answer the eternal question, “What has America ever done for us?”

Starting with a fairly innocuous one, the beloved clothes peg. Slowly drifting out of fashion as busy lifestyles mean increased use of tumble driers and indoor airers, let us not forget the fond memories we have of nan’s washing on the line. Stiff, white sheets, billowing in the breeze, and the only time it was acceptable for granddad’s pants to be on display in public was all down to one David M Smith who patented the design of a spring between two interlocking wooden prongs in Springfield, Vermont.

Talking of Springfield, though the fictional kind this time, would Sky TV be the success it is without the ratings these guys brought in? Starting way back in 1987 as part of the Tracey Ullman Show, their Halloween Specials are legendary.

Whilst we’re on the subject of US TV, what wet, Saturday afternoon/recovery from a miserable break-up/day on the sofa would complete without a Friendsfest. For issues from infertility to sandwiches, what better company is there than Friends? And whatever happens, they’ll “be there for you, when the rain starts to pour…”

One time you don’t want the rain to pour is at NASCAR, or The National Association for Stock Car Auto Racing, to give it its full name. I’m a big fan of stock car racing, and we do an excellent job of it in the UK, but if you want to see it done in spectacular fashion, you have to see NASCAR. Headquartered in Daytona Beach, Florida, it’s second only to the NFL in terms of US TV sports ratings. And trust me, once that intoxicating mix of the thrum of a finely tuned engine and the unique scent of the exhaust fumes it emits gets into your system, you’re hooked for life.

Talking about being hooked for life, enter all you iPhone addicts. Not only did America, via Apple, give us the iPhone, but thanks Alexander Graham Bell, we also got the telephone. The first patent for the telephone was awarded in 1876 in the US to the rather mysterious sounding, “apparatus for, transmitting vocal or other sounds telegraphically…by causing electrical undulations”. Without the telephone, there would be no iPhone, and then how would we all play Candy Crush and Angry Birds?

Although while those angry birds fly thanks to Apple, humans fly thanks to the Wright Bros. Those magnificent men in their flying machines, who certainly did go up, up, up, up with their first flight on 17th December 1903, lasting 12 seconds and reaching 120 feet.

We might not doubt the claims of the Wright Bros, but there are plenty of stories we do doubt from the US which have given us some of the most spectacular conspiracy theories. From the suspected Kennedy involvement in the death of Marilyn Monroe to the rumoured Bush administration involvement in the 9/11 attacks, no conspiracy theorist’s repertoire is complete without a stock of political stories from the USA.

Something else that isn’t complete without help from the US? Your wardrobe without a good, comfy pair of all American jeans. Patented by Jacob Davis and Levi Strauss in 1873, jeans are the one item of clothing that if worn with the right attitude, can get you in just about anywhere. Not only that, in times of dire straights abroad, they can even be used as a trading currency.

Also incredibly useful in times of dire straights abroad, the US dollar is the stock currency for economies in trouble. Sometimes it will get you more than using the local currency can thanks to its overall stability, which makes it an essential for any non-european backpacking trip.

Wherever your back-packing dollar might take you, there’s one other currency that will see you make friends across the world, and that’s football. “What have the American’s done for football, apart from annoy everyone by calling it soccer” I hear you cry? Having indicted some of the top FIFA officials on corruption charges, they have at least started the process of facing up to the inherent corruption in international football that has been the sports worst kept secret for years. Although, in typical British style, we don’t like to be too effusive with our praise. As one football supporter I spoke to said, “It’s a bit like World War Two, we didn’t really need them, but we’re grateful for what they did.”

Perhaps America’s most frightening contribution to the world came during World War Two. The Manhattan Project, led by the US and supported by the UK and Canada, produced the first nuclear weapons. You don’t need me to tell you how terrifying or destructive they are, instead I’ll leave it to J Robert Oppenheimer, one of the fathers of the atomic bomb. When reflecting on the first detonation of an atomic weapon he quoted words from the Bhagavad Gita saying, “Now I am become Death, the destroyer of worlds.”

So there we have it, from the functional peg to the atomic weapon, that’s what America has done for us. But let’s not forget the final and most important gift they’ve given not only us, but the rest of the world, the unifying sport of American bashing. If all else fails, you can bet your bottom dollar (or last pair of Levi’s) wherever you are in the world, someone else will also want to bemoan their lack of gun control, use of death penalty, relentless commercialism, over enthusiastic greetings and general peppiness along with you.

But, who am I kidding, we (grudgingly) love them really, so happy Independence Day to all you Septic Tanks out there.