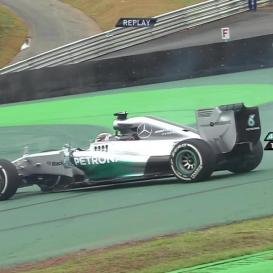 Formula 1, the fast action of on track driving, competing against others at crazily high speeds. But sometimes a more delicate sense of driving is implemented, particularly when a driver is careering across the circuit, about to crash into the barrier.

Throughout 2014 some of the drivers have produced some stunning spins to stop themselves from making costly mistakes and, on that note, here are my top three saves of the season.

Sebastian Vettel has proven himself as an exceptional driver since he joined the Red Bull team back in 2010. He has won four consecutive world championship titles but has taken a backseat throughout 2014. In Hungary, the eleventh race of the season, Vettel really showed that he wasn’t a lost cause. The rain soaked track caused his car to spin, hurtling him towards a concrete barrier. After a dramatic spin the German managed to stop in parallel to the wall, having narrowly missed colliding with it.

Watch the video below from 0.44 seconds in for the best view.

Daniil Kvyat is the new kid on the block. He’s managed to stand on his own two feet against team-mate Jean-Eric Vergne and it was recently announced that he has pipped the Frenchman to the coveted job of replacing Vettel at Red Bull in 2015. The young Russian has really proven himself this season, perhaps his best moment coming in Monza when he veered onto the run off area and managed to save the car and safely return to the circuit.

Lewis Hamilton was the strongest contender for this year’s title and he finally clinched the title in Abu Dhabi. Whether it was pressure from team-mate Nico Rosberg or just an unusual mistake, in the penultimate race at the Interlagos circuit of Brazil, Hamilton was only mere seconds away from leading the race. An almighty spin left him floundering slightly but not in the wall and able to continue, though it did leave him 6 seconds behind where he needed to be to win.

Watch the video below to see the exact moment when Hamilton spun.

The 2014 Formula 1 season has been a fine one to say the least and the above three are just a handful of saves and spectacular driving to choose from. Bring on 2015.

Are there any driver saves that you think should have been included on this list? Have your say in the comments below.