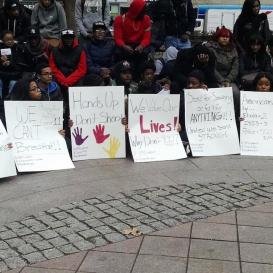 This week’s social craze is not funny like the Ice Bucket challenge, nor crazy like #PizzaOnATrain, however it is one that has cut deep in to social media throughout America and provoked a storm of social activity. Many of you no doubt will have heard of Eric Garner, a 43 year old black American man who was choked to death by a white NYPD officer whilst in his custody. This occurred back in July of 2014, however the uproar that is now sweeping the nation is due to the fact that the officer who performed the illegal chokehold has been released without charge despite the fact Mr Garner was unarmed and repeatedly yelled “I can’t breathe”

The legal and moral implications of the decision will not be the focus of this article, but rather the positive power of protests organized and carried out over social media that has brought America together. Three nights of peaceful protests have occurred throughout New York City and this is beginning to spread to other areas.  Estimates put protesters in New York between 1,500 and 2,000 strong, however what makes the protest a fantastic example of society coming together is the fact that there have been few reports of violence.

Let this moment bring meaningul changes to “centuries of racism that have brought us to this day” #ICantBreathe pic.twitter.com/clYLHFy2OX

On the streets people have turned to thought-provoking ways of protesting, such as carrying fake coffins with the names of police shooting victims. This in particular strikes just as hard as violence or intimidation would do. Similarly people have been preforming “Die-ins”. Lying on the streets in front of police in a visual show of defiance against the excessive use of force.

Spontaneous die-in of hundreds outside City Hall, Boston. It looks like a scene from a war movie. #ICantBreathe pic.twitter.com/FQsjTv4iFY

There have been countless examples of people supporting the desire for change in innovative and constructive ways on social media as well as on the streets. One such example was over 100 Broadway stars including actors, directors, choreographers and designers who created a video protesting the force of the police. Yet the spoken word video incited peace in retaliation, focusing on promoting words over bullets. Talking about the situation will help lead to change and in turn help end the conflict and eventually create safer streets for America’s citizens. Times Square stood still for the performance showing solidarity with those involved and most importantly, with the late Eric Garner.

This incredibly touching video documents the full force of the power that people can have over social media. Yet YouTube is just one way the hurt has been expressed. A scroll through #ICantBreathe is just as gut-wrenching as the video above and some of the artwork is just as inventive. All artwork, tweets and pictures are fantastic examples of the power of a positive social craze and in this case it has helped bring people together to promote a powerful message – change is needed!