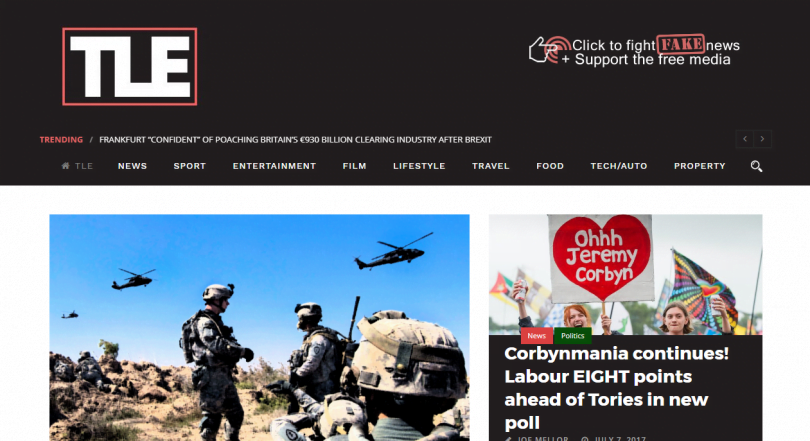 Around the time of the recent General Election in June, new and 'alternative' news sites saw a sharp increase in popularity. One such site, The London Economic (TLE), which was founded in 2014 and now has over 200 writers and a growing readership. I spoke to editor Jack Peat about why the site was founded, its aims and objectives, and its relationship to the mainstream media.

Would you consider TLE to be an 'alternative news' site?

The alternative tag baffles me a little. In the run-up to the General Election the Daily Express ran two front page headlines explicitly telling people how to vote and it was well documented how biased other national media were towards the Conservative Party. If that is "mainstream" then we should be worried.

In your campaign to support ‘free and real journalism’ you say that much of the traditional media has an increasingly strong right-wing bias – is it TLE’s mission to counter this? Why was the site established?

The site was established to counter the fact that the mainstream press is run by a handful of powerful corporations. In many cases that manifests itself in a strong right-wing bias, but regardless of their political sway it isn't healthy to have a national media run by just a few people. The advent of the internet and social media has liberated publishing and allowed us to loosen that grasp, as was seen in the 2017 General Election.

Why is the not for profit ethos of TLE important in light of increasing concerns about ‘fake news’?

Pay for clicks is conducive to fake or misleading headlines, so our not-for-profit ethos allows us to write responsible journalism. We invest all our revenue back in to journalism, and have run several exclusives of late thanks to the work of our investigative writers.

During the recent General Election, the site had one of the most widely shared news pieces on social media – what made your General Election coverage so popular? Was it pro-Corbyn?

The reason we were the most shared publication during the General Election campaign is because we picked up on a big movement on the ground that wasn't been reported in the national media. That specific post was a brilliant bit of editorial on the discontent that people were feeling with the current government, with clear undertones that there was an appetite to get out and force change. It was reflective of all our viral posts in that period which, rather than been "pro Corbyn", picked up on a big groundswell among the general public.

While the site is critical of much of the mainstream media, isn’t your relationship with traditional media outlets somewhat complicated given that news agency SWNS owns a stake in the site?

Not at all. SWNS is editorially independent and we are one of several investments it has made in digital media across the spectrum.

What are your plans for the future and expanding the site further?

We plan to action a commercial strategy so we can start to pay contributors and invest more into investigative journalism. To facilitate that we want to encourage more people to contribute to the site, especially students, who had a big role to play in the latest General Election.

If you want to get involved don't hesitate to contact me at [email protected].