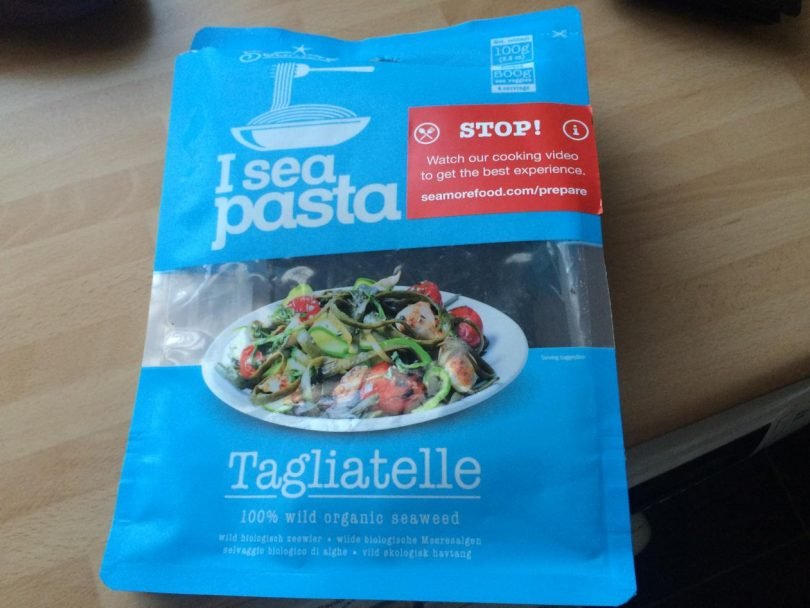 Italian food and seafood are two of the best types of foods to exist. So when offered the opportunity to sample I sea pasta by Seamore, I had to get involved and see what this is about.

The packaging advises preparation in three ways: Boil for 15-20 minutes (the safest option I decided to take) to make it more tender, soak for 20-25 minutes in hot water or soak it for 45 minutes in cold water which would be more suitable for cold dishes. Seamore also recommend adding to salads, stews, soups, curries and omelettes etc however as I was a little sceptical I decided a simple prawn linguine based dish would be best. It's 100% organic and created from Himantalia Elongata.

As a fan of al dente pasta, I decided I would boil it for 15 minutes. The pack is about 100g raw, and I found opening it it was a little tangled (and smelt as though it had just jumped out of the sea!). It resembles seaweed in texture when raw (surprisingly…). It broke into four pieces nicely so I took one of the sections and threw it in a pan of boiling water. When it began to boil after around 30 seconds, it began to smell very fishy. In fact, it smelt more fishy throughout the cooking process than the prawns I added to it! As I wasn't sure it would be a particularly filling lunch for my following work day, I added 50g of ordinary linguine once the seaweed pasta had been boiling for five minutes.

The smell of the cooking pasta was so salty, I decided not to add any salt to season. Whilst the linguine/ seaweed cooked nicely, I prepped my extras: some celery, tomato and cucumber. After the seaweed pasta had been simmering for another ten minutes, I decided this would be the opportunity to taste it for the first time. It was a little bit bland as the water was unseasoned, I assumed that the saltiness of the seaweed would cut the mustard for this so I added some salt to water. A minute later I strained the pasta mix and transferred it into a plastic container and added the salad ingredients plus prawns, crushed chilli seeds and some balsamic vinegar to taste.

Once left to marinade overnight, I looked forward to my lunch for the following day. As soon as 12.30pm hit, I was straight into the kitchen to sample this completed dish. I found the texture of the seaweed pasta a combination of squid and regular tagliatelle pasta, which suited me down to the ground with my love of al dente cooking! It tasted much better with the seasoning. My choice of ingredients complimented the pasta and I was glad I added linguine to it as I found it kept me a little fuller for longer. The portion size was perfect too.

Overall I was particularly impressed with this product. I would recommend it to anybody who enjoys seafood and is willing to try something new and different to other items available. It's a great solution to those trying to cut down on carbohydrates without compromising their favourite pasta dishes too!

Food and Drink editor for Kettle. NCTJ qualified journalist. 22 and from the South Coast!