We’ve been told it’s not a drill. But what do we actually know about the supposed reunion Disney’s baddest boy band The Jonas Brothers?

Despite nearing 22, I am not shy about my love for the pop band. A love that began when they first hopped onto our screens in ‘Camp Rock’ and spanning over 10 years. The Jonas Brothers still have a place on every playlist I’ve made. And with bangers such as ‘S.O.S’ and ‘Burnin Up’ who wouldn’t be anticipating their long awaited return.

The trio, formed of the three eldest Jonas boys, originally announced their spilt in 2013. After a hiatus the boys cancelled their 2013 reunion tour just days before it was due to being, claiming “complications within the group”.

Since then the boys have ventured on their own paths. Nick Jonas gained notable solo success with several chart toping singles such as ‘Levels’ and marrying Priyanka Chopra in 2018. Joe Jonas is currently the frontman to DNCE who have revealed in their own chart success and is engaged to ‘Game of Thrones’ Sophie Turner. While Kevin Jonas temporarily stood back from the lime light to focus on his two children with long term wife Danielle Jonas.

As a self confessed stan, you can imagine my excitement when I woke up one morning to not one, not two, but six different articles covering the reunion.

None of them offer the reassurance of an official confirmation. But after reactivating their Instagram account last year, this is news many fans have been anticipating.

The brothers are reportedly forming under the new name JONAS, and the reunion is to be spotted by new music, live tour dates, a documentary and notably better hair. 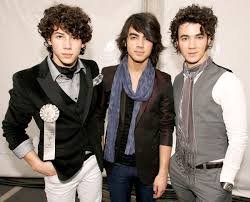 (The boys back in their prime image: google)

Although the boys are yet to confirm the news, Nick Jonas has apparently been spotted liking tweets surrounding the rumours. Which we all know can be as good as an official press release…

Now as exciting as the news is, it’s important that us fans don’t get too excited.. The boys have denied all reports in the past on possible reunions and cancelled the last one just days before.

However, this could just be the news we need to already make 2019 a better year than 2018.