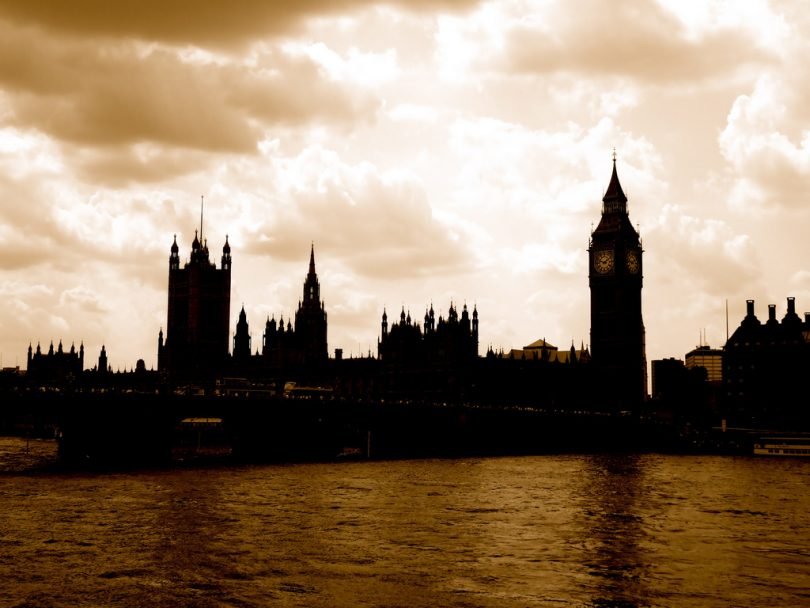 Though she repeatedly claimed she was against the idea of an early vote, on 18th April 2017 Theresa May called for a snap election in June. In a statement outside Downing Street, she stated that the election would be 'the only way to guarantee certainty for the years ahead,’ no doubt referring to post-Brexit future.

Since the announcement, over 2 million people have registered to vote, with registrations arriving at a faster rate than with the EU referendum. May 22nd has had the highest number of registrations so far, with 622,000 people registering to vote. 246,000 of these came from under-25s, which is a signficant increase compared to the 2015 general election, where only 137,400 young people registered.

This change in numbers shows that young people are determined not to miss out on having their voices heard. Campaigns across university Student Unions have been pushing their student populations to exercise their democratic privilege, in the form of talks, leaflets, fluorescent stickers, you name it. My own university has sent out numerous emails encouraging us to get to local polling stations and make a difference.

It took centuries for suffrage to get where it is today in the UK. The first example of some rights being given to ‘the people’ occured in the form of the Magna Carta (‘The First Charter’ in Latin) a historic document agreed to by King John in 1215. It is essentially the first written constitution in European history, detailing the property rights of barons and other powerful citizens within this period. It’s important to note that the benefits were only reserved for the elite; the working class did not have a voice in the government.

The beginnings of a parliament were also established during this time period, taking place whenever the king needed to raise money through taxes. Following the Magna Carta, this became a frequent occurrence. After King John’s death, his 9-year-old son Henry III became his successor, with Lords governing on his behalf. After his minority ended, Henry would not consult his barons about his decisions, consequently leading to a Second Barons War from 1264 to 1267, with Simon de Montfort in charge. In 1265, the first English parliament conducted its very first meeting at the Palace of Westminster – now known as the Houses of Parliament – led by de Montfort. Historians recognise this as a landmark event in establishing parliament as a political institution and forming the beginnings of free speech within a monarch’s rule. 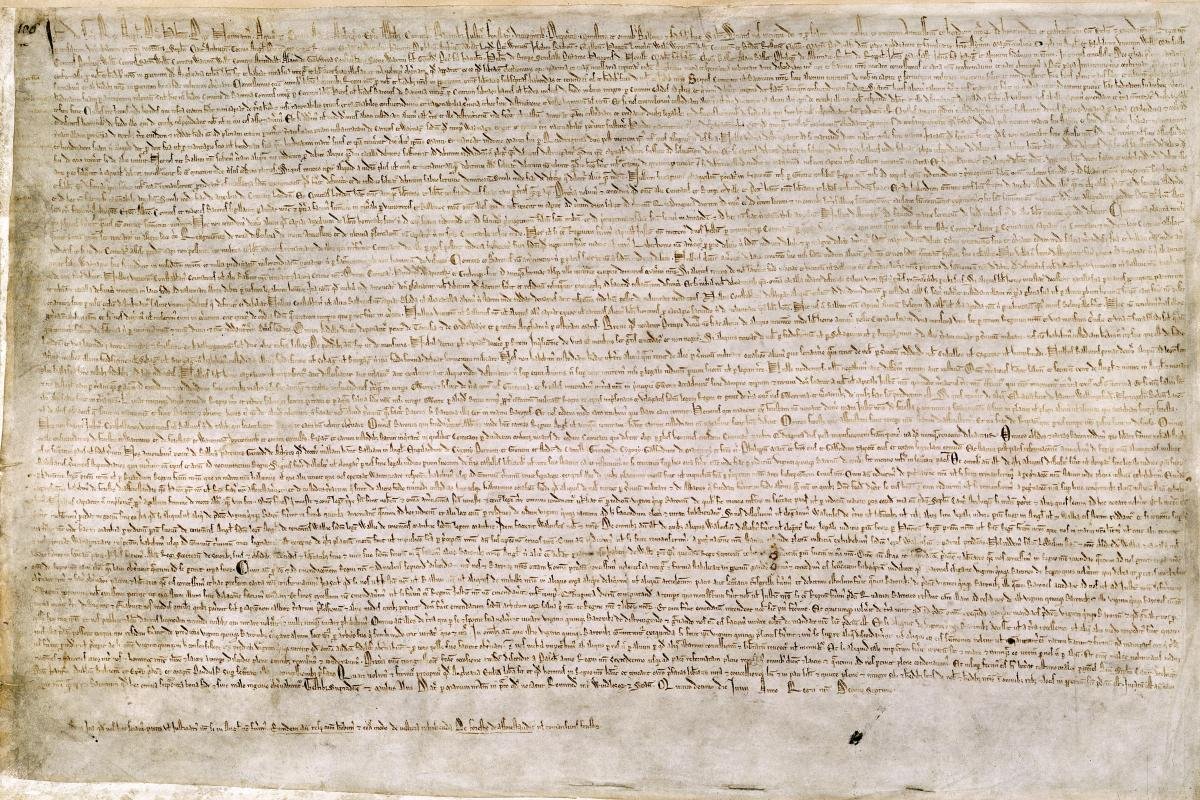 The Magna Carta as displayed in the British Library. Image credit: Wikimedia Commons

A real parliamentary difference occurred with The Glorious Revolution of 1688 when King James II of England was overthrown by a union formed between English Parliamentarians and William III, Prince of Orange. Before William could ascend to the throne with James’ daughter, Mary II of England, they both had to accept the Bill of Rights which was released in 1689. This Bill guaranteed certain rights of England’s citizens and protected them from the power of the crown. It also established the principles of having frequent parliaments, free elections and freedom of speech within Parliament. The Bill was also supplemented later by the 1701 Act of Settlement. Together, they reduced the powers of the crown and contributed to parliamentary sovereignty, which is what makes Parliament the most powerful government institution in the country.

It was only in the 19th century that there was a radical change in suffrage and even further reform within parliament. Very few people could vote in early 1800’s Britain – in England and Wales, this was less than 3% of a population of nearly 8 million and in Scotland, only 4,500 out of 2.6 million. This right was also only extended to men and in a lot of locations it depended on whether they owned any property or paid taxes of a certain amount. Equal representation in Parliament was also an issue. Large industrial towns like Manchester had no MPs to represent them, but infamous ‘rotten’ boroughs with extremely small populations (Dunwich in Suffolk, with a reported population of merely 32 in 1831!) had two MPs in Westminster.

Initially, pressure for reform came from the wealthy and powerful, who wanted to gain a political power to match their economic influence.  After the French Revolution, this notion reached wider audiences. Politically-fuelled works such as Rights of Man by Thomas Paine and various campaigns, including one by the Birmingham Political Union, made many realise that a drastic change was needed. The first Reform Act of 1832 extended voting rights to males who rented land of a certain value. It also disenfranchised all of the rotten boroughs and created 67 new constituencies. This, in turn, redistributed representation in Parliament and allowed it to portray the country a little bit more accurately.

The act was revolutionary in the sense that it allowed the middle classes to share some social and political power with the upper classes. But no change had been achieved for the working class, as many of the men did not fit the property qualifications required to vote. The second and third Reform Acts, though they increased electoral size considerably, still resisted the idea of ‘one man, one vote,’ as 40% of adult males in Britain still did not have the vote. As well as working-class males, the Reform Acts excluded women of all ages and races. The fight for women’s suffrage was in the works during the 19th century too, and it is crucial to note that just as the struggle for universal male suffrage, female suffrage was not gained easily. Many bills were presented to parliament and small gains were made before full female suffrage was achieved.

The first female suffrage organisation in the United Kingdom was the Sheffield Female Political Association. According to the British Library, there were sixteen other societies throughout the 1800’s in favour of female suffrage. In 1897, they all came together to form the National Union of Women’s Suffrage Society. Millicent Fawcett became their leader after 3 years and adopted peaceful and legal approaches to achieving enfranchisement for women, nevertheless still campaigning tirelessly. The NUWSS is therefore known as a suffragist society because it did not believe in using violent and explosive tactics to present their message.

Despite the growth in numbers of the NUWSS, one woman was dissatisfied with the lack of progress the movement was making. Emmeline Pankhurst formed the Women’s Social and Political Union in 1903, with her daughters Sylvia, Christabel and Adela. The Daily Mail honoured them with the name ‘suffragettes’ in 1906. Employing the notorious motto ‘Deeds, not Words,’ the suffragettes used more aggressive, illegal and public strategies to draw attention to their cause. They chained themselves to railings, smashed windows, detonated bombs and damaged public property. One of the most well-known acts of recklessness was that of the suffragette Emily Davison, who died by George V’s horse at the Epsom Derby, in June 1913. 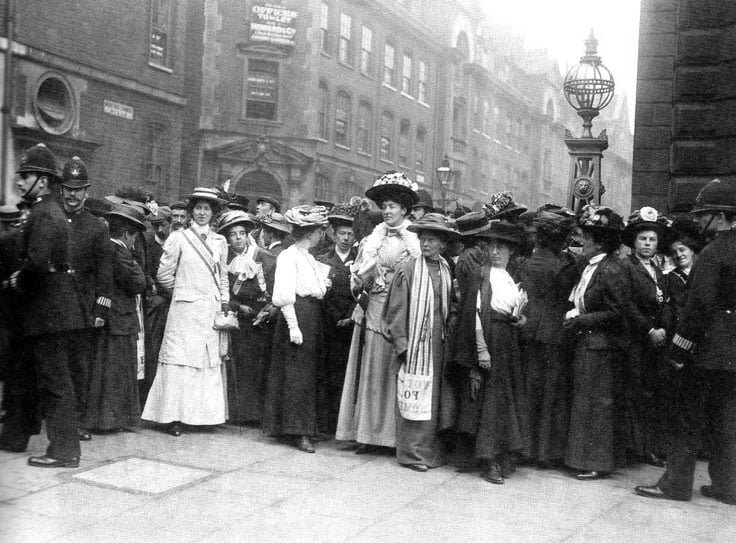 The Pankhursts and other suffragettes at Bow Street. Image credit: Wikimedia Commons

A fact which sometimes goes unmentioned is that the suffragettes did not campaign for women of working classes. They only endeavoured for those women who were in the same league as their male voting counterparts, as compared to universal suffrage for women. They were criticised for leaving out working and other disadvantaged women, but the suffragettes saw this merely as their only realistic aim.

When they initially began being imprisoned, suffragettes first lobbied to be political prisoners, which would allow them to have certain freedoms, such as being allowed to write or have visitors. When this was refused, they went on hunger strikes as a way to continue their protest. The government’s response was to force feed them in a barbaric and inhumane way. One account of Sylvia Pankhurst describes the experience: ‘Sometimes, but not often […] I felt the tube go right down into the stomach; a sickening terrifying sensation, especially when it reached the breast.’

The government did not stop there to combat the women – they then introduced the Prisoners (Temporary Discharge for Ill-Health) Act, also known as the ‘Cat and Mouse Act', in 1913. Its main purpose was to release the suffragettes if they became too ill, and re-arrest them once they had recovered; Emmeline Pankhurst was arrested and released 11 times. The reason behind this Act is extremely sinister, as it essentially stripped the government of any responsibility for harm done to the suffragettes, including death. As WW1 broke out, the suffragettes shifted their attention to the war effort and nearly all hunger strikes ceased. This focus shifted public opinion in favour of the suffragettes’ struggle, as they eagerly took on male roles and portrayed their capabilities. The NUWSS, however, still continued to lobby for female enfranchisement using their peaceful methods.

After the war ended in 1918, a proportion of women were able to vote – the Representation of the People Act granted the voting rights to women over 30, but only if they met a certain property qualification, were wives of householders or university graduates. Once again, this only represented 40% of the female population in the UK (8.5 million), excluding those in lower socio-economic positions. This act also enabled all men over the age of 21 to vote and eradicated the previous property restrictions in place. Universal suffrage was finally achieved through the Equal Franchise Act of 1928, when all women over 21, of all classes, were able to vote, increasing the female electoral number to 15 million.

The voting age was further lowered to 18 in 1969. Recent times have seen the SNP lowering this to 16 in Scotland, and some also believe that it should be lowered to 16 in England and Wales. Labour, Liberal Democrats and the Greens all share this sentiment, with the exception of the Conservatives. When asked about her decision to rule out votes at 16, Theresa May argued that young people can get involved with politics in a number of different ways and that casting a vote is not the only way to do so. Whether this will ever happen or not is something for the future.

It is important to realise, however, that suffrage in the UK has not been an easy right to gain. The fact that we are living in a democracy should not be taken for granted, as a considerable amount of countries still reside under an absolute power. Though universal suffrage may not have been the first priority of those who fought for the vote, there is a need to exercise this fundamental right during this election and in the future and, hopefully, see a visible change.