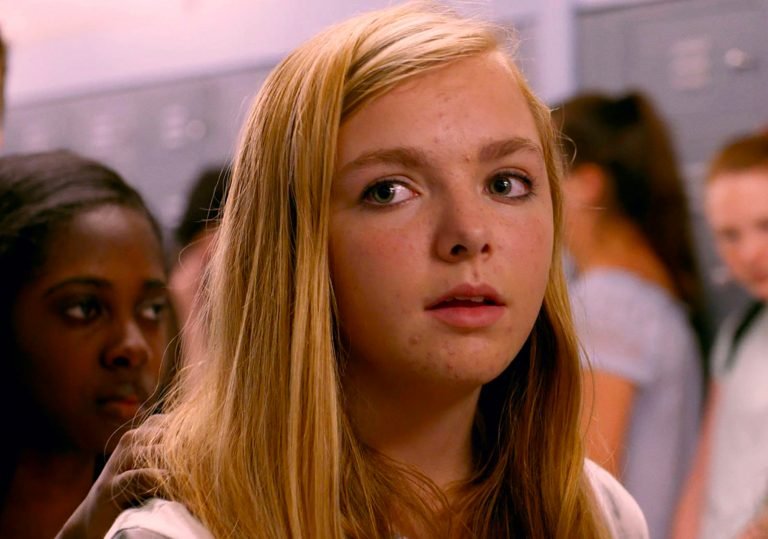 I came out of the cinema having watched ‘Eighth Grade’ with a stiff neck. I glimpsed most of the film with my head wedged somewhere between my elbow and my armpit. And I wasn’t alone. As I stole a glance around me, I smiled to see, nestled in the deep cinema sofas, men and women of all ages, their bodies contorted with embarrassment, squirm with pain as they reminisced, perhaps not so fondly, on their own experiences of being 13.

It’s not often that a film engenders such a physical response from an audience. But Bo Burnham’s directorial debut, which tells the story of painfully shy Kayla as she prepares to leave middle school, with a standout performance by Elsie Fisher, so pertinently captures what it is to be a young teen, eagerly on the cusp of adulthood, but on whom adulthood seems not yet to fit, I defy any cine goer not to shudder. The foundation that Kayla applies in her bedroom mirror sits bumpily over her spotty skin; her long blonde locks, which she blow-dries according to an online tutorial, cling greasily to her head; when shown romantic interest, she clumsily over exaggerates ‘how far she has gone’, yet clams up when actually presented with a mildly sexy offer in the back seat of a car, in a scene which oozes a natural first encounter awkwardness that couldn’t be recreated for the screen, owing to Burnham’s decision to keep pre-shoot rehearsal to the bare minimum.

Yet ‘Eighth Grade’ presents a specific version of youth with which the adult audiences to this 15-rated film are perhaps not so familiar. Like teenagers who have gone before her, Kayla is desperate to shut out her totally embarrassing dad (Josh Hamilton), who is heartbreakingly persistent in his attempts to be both father and mother in this single parent family. But as she slams her bedroom door and cranks up the discordant, digital tunes of composer Anna Meredith, Kayla retreats into a 21stcentury, online world, furnished with constantly refreshing, endlessly scrolling, social media feeds.

Oddly, for a director who made his name on YouTube, Burnham is subtly condemnatory, not of Kayla’s hallowed dedication to Instagram, but of the impact that such social media has on an already cringe worthy period of one’s life. With a depiction of the teenage consumption of these media sources so accurate there is no doubt that Burnham sought counsel from his young stars, he is critical of social media allowing teens to overcome the real-life mismatch between the adults they wish they were and the children that their bodies seem determined to keep them as by helping them to construct images of themselves for others to consume. Kayla posts filtered selfies unironically captioned ‘just woke up like this’, and films self-help vlogs in which she pronounces herself ‘really funny and cool and talkative’ in spite of the fact that she was awarded the prize for ‘most quiet’ at school.

When faced with real life situations, devoid of the technological means to conceal the childish traits that a 13-year-old might be keen to deny, Kayla is crippled. A pool party sees our unlikely heroine prefer to submerge herself underwater, unfiltered and in a slightly too small swimming costume, than to be judged in real time by her peers, who Burnham makes anthropomorphic as they screech and bare their orthodontically clad teeth, ready to go in for the kill.

With ‘Eighth Grade’, Burnham joins the ranks of a new generation of film makers (Lukas Dhont, Luca Guadagnino and the like) who are tearing up the rule book when it comes to making teen dramas. Up until now, big budget adolescent flicks have largely taken the coming of age terminology to heart. The films that I grew up with- Grease, Mean Girls, Clueless- were formulaic in their approach, all following a slightly spoddy lead on her journey to becoming a beautiful, confident woman. They all pedalled to their hormonal audiences the false notion that being an awkward teenager is a finite phase that will inevitably conclude with you emerging from your cotton circle skirt chrysalis as a black hot pant wearing butterfly. And sure, that view of adolescence is hopeful but, I think we can all agree from experience that that’s not how life works. Burnham’s directorial refusal to airbrush adolescence, paired with Elsie Fisher’s candid and naturalistic approach to acting, make ‘Eighth Grade’ one of the most refreshing and honest films about growing up that I have seen in a long time. An absolute must watch for anyone who is, or who has ever been, a teenager.