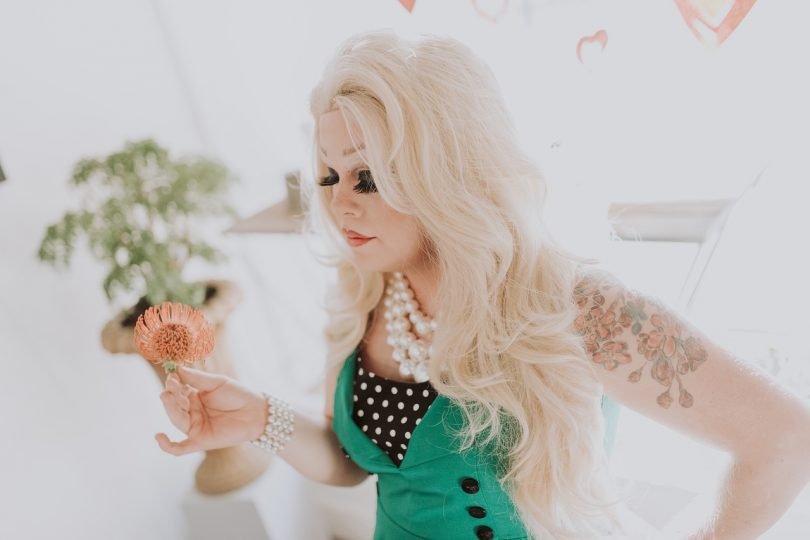 Towering inches off the ground in crystal clear stilettos, platinum bottle blonde extensions flowing and a gorgeous grimace on her face with eyes which you now realize are staring directly into yours. Victoria Sin has arrived. In full view on a projector in the heart of East London’s ‘Whitechapel Gallery,’ she casts words upon the audience as if they are spells. In the collaboration she was part of with renowned writer and visual artist Sophia al Maria (Virgin with a Memory, The Girl Who Fell to Earth) as part of a curation entitled ‘La Caixa’ ...this was my introduction to drag queen and visual performer; Miss Sin.

It may sound a little ridiculous but in today’s age of all-inclusivity, gender fluidity and a generally more understanding approach to gender norms and biases, it is still pretty uncommon to see a woman in drag. That was something I myself had to stop and think about. What are the gender dynamics at play here? What does that say about women being respected in what is commonly deemed as ‘safe spaces’ for us? As many a time women find themselves pushed out by the misogyny demonstrated by other members of the LGBTQ community – particularly gay men.

Sin’s presence is really an anomaly as women are so often cornered out of drag and deemed by the men who dominate the scene as unqualified to take part. Which is a hysterical paradox when you think about the dynamics of drag; men imitating the wildest caricature of women possible – it is woman as spectacle. In an interview with ‘Elephant’ she notes the issues with “racism and misogyny” still having their parts to play within the gay and drag communities and wanting to challenge the “colonial and patriarchal gaze.” She has appeared in a number of articles and features in short documentary ‘Can’t Drag Us Down,’ produced by Broadly.

This is an interesting take on the current dichotomy between how accepting and evolved we’ve become when it comes to men and women and gender/sexual equality: little is said about how patriarchy is still fierce in the spaces that many women deem as safe. Sin, however, uses her platform and space as a performer to understand and resolve the issues presented from the blurry lines formed between womanhood and femininity and how this can be forced upon us as young women without a real understanding of what femininity looks like.

She mentions growing up in a “traditional Chinese family,” and in many cultures – particularly for young women from ethnic minority backgrounds it can be extremely difficult to own your own sexuality and femininity without being judged or boxed in. Yet, women like Victoria Sin find there is kinship in the small world of women who perform drag – they’re supportive of each other as the spaces they occupy are often disparaging towards them. There is an important role they play in pushing forward new ideas about performance art, women’s participation in queer spaces and femininity as a spectacle.