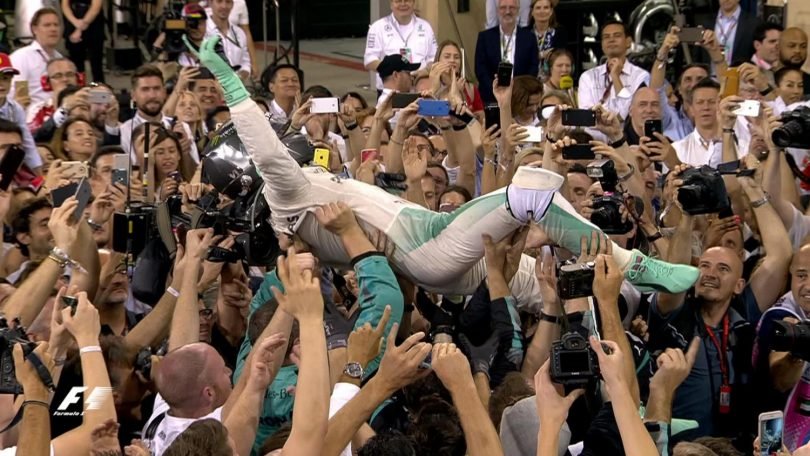 Rosberg finished the World Championship just 5 points ahead of teammate Lewis Hamilton, in a season of roaring rivalry between the two.

Hamilton came out on top in Yas Marina, however, it wasn’t enough for the Brit to claim his 4th world title, despite his best efforts.

The final 10 laps saw Hamilton dramatically decrease his speed, presenting and opportunity for the charging Sebastian Vettel and Max Verstappen to try and pass Rosberg, which would have been enough for Hamilton to take the title.

However, Nico Rosberg held off the pair and collected his first ever title, 34 years after his father Keke picked up his World Championship Crown.

Hamilton was backing up Rosberg as the laps counted down, and came under some heavy criticism for his slow pace in the tail end of the race. Hamilton recorded a final lap time 9 seconds slower than his lap one time as he encouraged Vettel and Verstappen to pass teammate Rosberg.

Hamilton also appeared to dismiss team orders, as Mercedes told the Brit to up the pace late on, to Hamilton’s response was “Let us race.”

"Lewis, this is Paddy. We need you to pick up the pace to win this race"

"I'm in the lead right now. I'm quite comfortable where I am" pic.twitter.com/CmepAo1Nrn

Sebastian Vettel capped the season off with a podium finish, crossing the line in 3rd. It was Vettel's first podium since the Italian Grand Prix. Despite a superb final race drive from the German, looking at the bigger picture Ferrari will be disappointed with the season, as Red Bull edged out the Red arrows in the Constructors Championship.

It wasn’t just Roberg creating records on the day, however, as Hamilton also wrote his name in the record books for all the wrong reasons. The Brit became the only man in F1 history to win 10 races in one season, and not win the World Championship.

The race began like the race ended, with drama from the very start. Max Verstappen collided with Nico Hulkenberg on turn 1, who was making his final appearance for Force India before his switch to Renault for next season.

Another look at how close it got between VES and HUL on that opening lap #F1Finale #AbuDhabiGP  pic.twitter.com/STsx6rwNDE

Hulkenberg eventually crossed the line in 7th, meaning Force India ended the season in 4th position in the Constructors Championship, narrowly ahead of Williams.

Verstappen found himself in 19th, and in typical fashion worked his way up the grid to finish in a respectable 4th position. Verstappen also only stopped once, an impressive feat using just Soft tyres throughout the race.

In a season that the young Dutchman he will never forget, Verstappen finished 5th in the Drivers Championships finishing ahead of veteran Kimi Raikkonen, despite driving for Torro Rosso for a small part of the season.

There were farewells for F1 icon’s Jenson Button and Felipe Massa, as they bowed out of the sport at the ages of 36 and 35 respectively.

Button, who leaves Formula one with one of the greatest reputations for driving in the wet, and one world title to his name, unfortunately, crashed out early on with a suspension failure.

As for Felipe Massa, he finished in the points in ninth position.

A standing ovation from the crowd for @JensonButton

And a hug from his tearful mum as he retires#F1Finale #AbuDhabiGP pic.twitter.com/4pqQ2kSLz4

Daniil Kvyat certainly will not look back on this season with great fondness, despite getting a podium in China, his demotion to Torro Rosso looks to be a turn for the worst in his career. His DNF in Abu Dhabi summed up the Russian’s season.

Another season draws to an end, and despite Lewis Hamilton winning more races than Nico Rosberg, the German came out on top in one of the fiercest rivalries in F1 History.

With Red Bull guaranteeing car improvements for next season, 2017 looks to go right down to the wire once again.