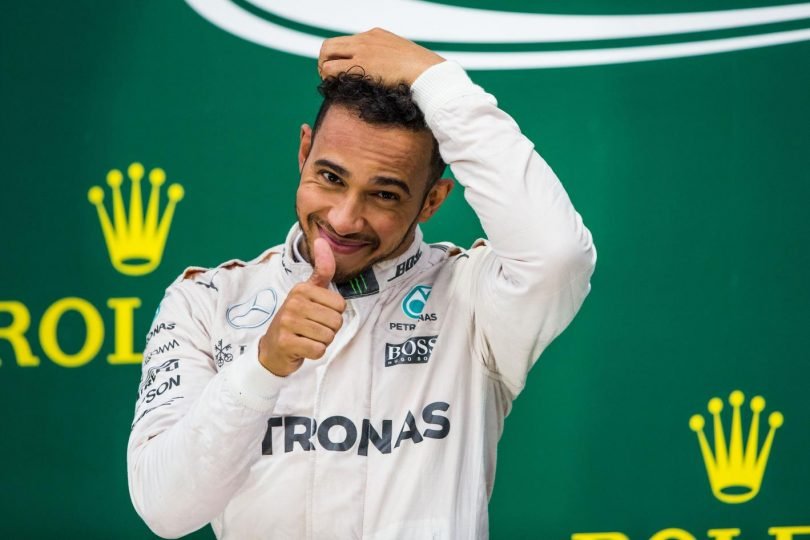 Lewis Hamilton claimed his first win in Brazil yesterday to make sure that the championship will be decided at the last race in Abu Dhabi. The win means that teammate, Nico Rosberg, who finished in second place heads into the title showdown with a twelve-point advantage.

Despite controlling the race, the man that everybody is talking about is not Lewis Hamilton, its Max Verstappen. The teenager put on a career defining drive in the treacherous conditions after a late charge following one of many safety car periods

Due to the high intensity of the falling rain, the start was initially delayed by ten minutes before getting underway behind the safety car.

Despite the delay, Romain Grosjean who qualified in 7th place which is Haas' best qualifying performance crashed on his way to the grid before the race began.

Another look at GRO's accident

It took seven laps for the safety car to come in and for the race to begin for real. At the restart Hamilton, much like in Monaco was the quicker of the two title protagonists in the falling rain and quickly pulled away from Nico Rosberg.

Behind the two leaders, Max Verstappen started to work is magic as he pulled off an excellent move on Kimi Raikkonen at the first corner and set about trying to close the gap to the Mercedes pair out in front.

As expected in the rain some drivers gambled for the intermediate tyres, the first of which being Kevin Magnussen who was quickly followed by Jenson Button. After a spin, Sebastian Vettel also made the switch to the green-marked tyres, but it was a gamble that did not pay off.

Conditions began to get worse for the drivers. The next victim of the rain was Marcus Ericsson who crashed at the final corner, bringing out the safety car again.

Amidst all the chaos some drivers benefited hugely from drivers ahead of the switching to intermediates when the track was too wet. Carlos Sainz made huge gains by staying on the full wets as did Felipe Nasr, Nico Hulkenberg and Esteban Ocon who all found themselves within the points.

All was going smoothly for Nico Hulkenberg in 4th place and looked to be in with a chance of a first podium in F1 but was forced to pit with a puncture.

The safety car led the pack for a number of laps before releasing the field once again. The second restart did not go to plan for Kimi Raikkonen. The Finn crashed on the start-finish straight and narrowly avoided collecting Ocon. Raikkonen's crash caused a red flag and with that, a 35-minute as the race director hoped it would give the track time to drain.

With the conditions getting worse behind the safety car the race was once again red flagged much to the anger of the fans in the grandstand, however, their patience was soon to be rewarded.

Max Verstappen pulled off a brave move on Rosberg at the restart. The Red Bull driver took a wider line on the exit of Turn 3 all afternoon giving Verstappen more grip and a better run onto the straight.

Rosberg, who took the more traditional line through the corner could do little about the charging Verstappen who impressed all afternoon. There was a heart-stopping moment for Verstappen whose race could have been over shortly after his gutsy move on Rosberg.

Verstappen miraculously managed to keep his car out of the barrier and second place despite a half spin on as he entered the main straight.

VES is off! How did he keep it out of the barriers?

Despite watching their driver almost crash due to the wet weather, Red Bull opted to switch both drivers onto the intermediate tyres in what was a call that cost Red Bull a chance of victory.

Red Bull needed the rain to ease off if their gamble was to pay off. Although for a time they were quicker than Mercedes, but whilst the rain did decrease in intensity, conditions were still too wet for the intermediates.

Felipe Massa crashed out of his final Brazilian Grand Prix on lap 48 which once again brought out the safety car.

Not the way @MassaFelipe19 wanted to end his last #BrazilGP

But he soaks up the applause and cheers of the fans  #F1 pic.twitter.com/0p2VrcJWAA

Red Bull had no choice but to switch both drivers back to the full wet compound meaning that Verstappen would have to go on a charge if he was to reclaim his podium spot which he lost after his earlier stop.

The Dutchman was in 16th place when the safety car peeled back into the pitlane as he began to work his magic. Verstappen, who won the driver of the day award picked off the likes of his teammate Daniel Ricciardo, Daniil Kvyat and Esteban Ocon.

He then quickly pounced onto the back of Felipe Nasr, and his old nemesis Sebastian Vettel before disposing of Sergio Perez for 3rd on the penultimate lap.

VES attacks VET, and Seb has nowhere to go…

VET: He pushed me off the track!" #BrazilGP #F1 pic.twitter.com/P5rDpBBqBt

As Lewis Hamilton cruised home to take the victory and the title fight to the wire, elsewhere, Carlos Sainz continued to impress as well as Felipe Nasr securing Sauber's first points finish of the season after coming home in 9th.