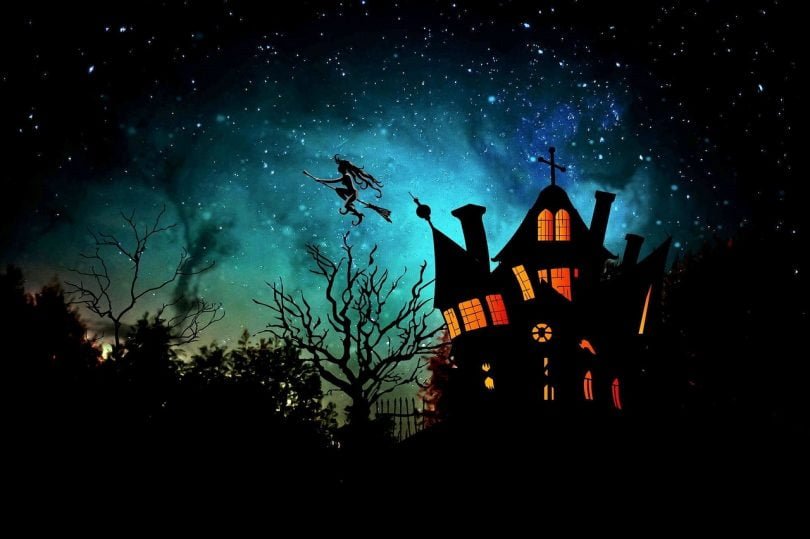 Whether you celebrate Halloween or not, the festivity is upon us. I don’t know about you, but I know I absolutely love having an excuse to watch all the scary movies and read all the scary books I usually disregard.

Because Halloween only happens once a year, I decided to compile a list of appropriate books for the occasion. I’ve decided to include books that scared me, made me look over my shoulder, or straight up made me shiver!

What better way to start off a scary-books list than with Frankenstein? This English classic written by Mary Shelley has so much to offer. No wonder it’s been considered a masterpiece for ages!

Frankenstein tells the story of Victor Frankenstein, a dedicated science student. His obsession with discovering what makes generation and life possible lead him to bring a lifeless corpse to life. Stealing body parts from graveyards, his newly-created being rises and causes him to be horrified at what he’s created.

Tortured by isolation and loneliness, the newly-living creature turns bitter, evil, and vindictive. Frankenstein’s monster, as he’s known, makes it his life mission to kill his creator.

But Shelley’s masterpiece isn’t just a horror book where an evil creature goes on a murdering spree. Besides having the obvious scare factor, it raises important philosophical questions. It’s a great reflection on the time period’s fear of the quick science developments and the core of “what is life?”

In 19th C, people began thinking about a future as created by science & technology. Considering novels such as #Frankenstein (1818) today might help us consider more carefully the ways we think now about the possibilities—& dangers—of our present futures.https://t.co/VVTjcAjSC6 pic.twitter.com/GmSHpa3dXJ

On a less classical note, Coraline is a fantastic novel (quite literally) written by Neil Gaiman. It’s aimed at young teens, but if you ask me, I think even adults would love reading it!

Coraline follows the story of a little girl who has just moved into a new house with her family. Her house is massive, her parents have better jobs — but there’s a catch. She hates living in this gray, boring neighborhood. So Caroline does what every little kid does to pass the time: she goes exploring all the nooks and crannies of her new house.

Coraline finds a series of doors that lead to an alternate universe where her boring neighborhood comes alive with color and fun. After spending some time in her colorful parallel reality, she starts to wonder — why ever leave? But Coraline soon finds that it’s not all roses in this new universe. In fact, there is a much darker side lurking beneath all the fun…

“DONT EVEN THINK ABOUT GOING OUT CORALINE JONES” ?? pic.twitter.com/ExmbqxJHK5

There’s Someone Inside Your House

Stephanie Perkins’s exploration into the horror genre gives us a fascinating slasher novel with loveable characters.

Makani Young is a young adult who has just moved from Hawaii all the way to Nebraska. What made her leave is a mystery, but one that would have a deep impact on the Young family were it ever to come to light.

All is going well for our main character: she makes great friends, starts having a crush on a boy, and is enjoying her new life. But her past seems to be coming back to get her — and she won’t be able to keep up her idyllic life if it does.

When the students at Osborne High begin to show up dead in a series of gruesome murders, Makani is forced to face her darkest fears and deal with her explosive past…

You can read our review of the book here!

This graphic novel packs a punch with its macabre storyline and even more macabre animations. The dominating colors — bloody red and inky blacks — add tension and chills to the whole graphic novel.

This book divides itself into several horrifying stories. They all have a dark fairytale feel and have wolves, worms, severed body parts, and specters. Reading these stories means being sucked into a world of eerie illustrations and of nightmares.

Something I really loved about this graphic novel is the way the author and the artists blend the story and the illustrations. They go perfectly together and complement each other. But what really makes this horror graphic novel stand out is how the monsters are never completely revealed at once, instead, the reader is left hanging and is supposed to put all the pieces together.

Every Halloween season, I try to recommend Emily Carroll’s spooktacular graphic novel THROUGH THE WOODS. One of my all-time favorite books. pic.twitter.com/UtldvLDrNv

A toddler wanders into a graveyard after his whole family has been brutally murdered. This could only be the start of a novel written by the genius Neil Gaiman, and the rest of the plot is just as interesting.

The supernatural residents and the ghosts of the graveyard all make a pact to look after and raise this little boy that has wandered into their home. They make a pact: to raise him as one of their own. And so it is. Nobody Owens, as the boy is known, grows up believing he, too, is a ghost.

The graveyard is home to Nobody Owens: it’s where his adoptive family lives, where his friends live, and where he learns how to be in the world. And what’s lurking beyond the graveyard walls is incredibly dangerous — Jack, the man who killed Owens’s entire family, is out to get him.

The Graveyard Book is a heartwarming and heart-stopping story of coming of age, identity, and a gruesome murderer on a mission. Gaiman’s writing elevates this already amazing story into something of another world.

Gabriella Versado has seen her fair share of dead bodies, but her experience as a seasoned detective isn’t enough to prepare her for what’s coming next.

The detective is called to solve a disturbing case in Detroit. When she gets to the scene, she sees something she was never expecting to find: a body that is half boy, half deer, somehow fused together.

Everything in the city seems to be torn apart after the finding of the body. From online relationships with predators, to trying to find an angle to cover a horrific story, to finding a monster in order to keep a homeless family safe — Broken Monsters has it all.

What comes of this detective-crime-meet-horror novel is an eerie tale of unexpected tales and sharp turns.

Which scary book will you pick first? And which books made the hairs on the back of your neck go up?