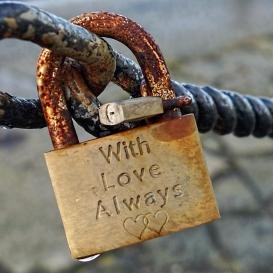 They shook their heads and clutched at your shoulders when you first told them about your new relationship; ‘Enjoy life being single, you’ll regret it when you’re older!’ They’re all eating their words when six years later you’re still bringing them round for dinner and choosing rugs for your new bedroom. Here’s ten signs that show you’re in it for life.

They’ll listen to your music even if they hate it

Yes, they make a silent judgement about your obsession with Maroon 5 and you will cringe when ANOTHER grunge rock album goes in the car but unlike before when you would switch it off, you’ll happily grin and bare it because you love them, even if it makes you inclined to stick razors in your ears.

Your relationship isn’t plastered all over the Internet.

Okay, so there is that really adorable photo you took together when you went to that really fancy restaurant and looked awesome, but that doesn’t mean you broadcast when you finish each others sandwiches sentences or when they pop your spots.

Their parents know as much about you as your actual parents.

Their mum knows what you’re allergic to and their Dad even remembers the course you study at university – they like me, they really like me! Don’t buy the dreaded in-law stories of your parents, they’re almost definitely not as awful as you anticipated – they created the human you’ve been with forever, they must be lovely!

You remember their packaged sandwich filling of choice.

Plus the snacks and drink that complete the perfect meal deal. You’ve been on enough day trips, night drives and hungover strolls to Tesco to have perfected what it is they reach for in an on the go emergency. (Mine’s a co-op chicken & stuffing sandwich, millionaire shortbread and a Pepsi Max just so you know).

You have a mutual respect for the celebrities that take their fancy.

Be it the cute bassist of that underground band they like or Alexander Skarsgard, drool, you don’t just understand it, you start to appreciate their looks as well.

You rarely argue because you know the outcome.

You know that if you complain about the way they drive they’ll get defensive so you bite your lip and hope to hell you don’t die. The same reason they never bring up the mass of hair that accumulates on the floor after you’ve blow dried it or start arguments about why you insist on leaving your open foundation bottle on the white bedsheets…

You’ll plan things months, even years, in advance because you’re in it for the long haul.

Anything from holidays to gigs will go in the diary for next year and you’re not panicking that they’ll take the emergency exit out of your life. Knowing that both of you fully committed to seeing the WWE tour next year has to mean something!

Wether you notice it or not there’s always a pattern. Even if you don’t live together or see each other that often, one of you always showers first, gets a specific side of the bed and chops the vegetables when you’re making dinner. You have a silent understanding that they will vacuum because you hate the noise as long as you get rid of daddy long legs and spiders if the situation arises. I’m officially the bug catcher on the weekends.

You aren’t scared about discussing the future.

A house? You’ve already got those kitchen designs complete. Marriage? Yeah, maybe one day. Children? There’s every possibility. The world is your oyster and mentioning wedding dresses, bathroom colour swatches and baby names doesn’t freak you out quite as much as it used to.

They can remind you you’re supposed to be eating healthy.

Before they wouldn’t have dared to tell you that you shouldn’t really be eating your seventh slice of that chocolate fudge cake because you said you were ‘becoming a fitter you’. Now they take the cake away, eat if for themselves and drive you to the gym just so you can stick to your resolutions. How thought of them…ahem.

People start asking where the ring is.

The previous naysayers change their tunes once you hop over the three year hurdle. Every time you go on holiday, have a meal out or even take a trip to the cinema expect a handful of people to turn it into a potential proposal situation.

You both just get it.

You’re crying over a burnt pizza – they understand. They’re throwing pencils around the room because the led keeps breaking, you totally feel it too. Growing together means you understand that there doesn’t have to be a reason for erratically over the top angst, just Netflix and an intense string of awful jokes when it starts to simmer down.