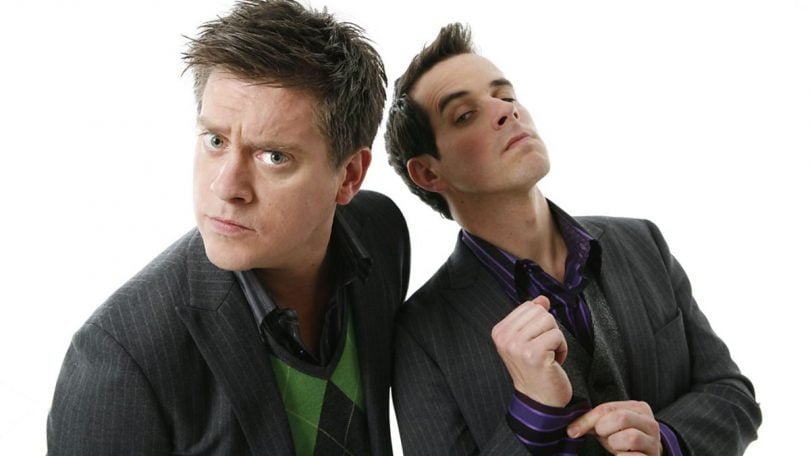 Children’s TV presenter and now DJ, Richard McCourt, talks about childhood, how he got into the media industry and tips for getting into TV presenting.

It’s difficult to meet Richard McCourt, known as Dick from the BAFTA award winning, comedy double-act Dick and Dom, without shouting ‘Bogies!’ – a game popularised by the duo on their 2002, BBC1 TV show, Dick and Dom in Da Bungalow. People take turns to say ‘bogies’, increasing the volume each time until someone chickens out. “Yes,” sighs McCourt, “I hear that every day. It’s become a legendary catchphrase and it will always be with us.’’

As well working on BBC1, McCourt and his TV partner Dominic Wood have written several books and have been the faces of many TV and radio shows. McCourt has starred in numerous pantomimes and even appeared in Horrid Henry: The Movie in 2011.

The 43-year-old now spends his time DJ-ing and gigging up and down the country at universities and festivals ‘’our jokes aren’t just for eight to twelve-year-olds anymore, they’re for everyone.’’ He has even performed in his native, Sheffield. ‘’Only a few weeks ago we did a night at The Leadmill – that was a teenage dream come true!’’

It all quietened down for the duo, until a video of the twosome taking part in a DJ battle at Chalfest went viral on Twitter during the summer.

‘’We continued to work year in, year out, but not in as many high-profile projects. We’re lucky that our audience has followed us through the years, and we keep getting new ones; a new generation are finding us on YouTube – we now span three generations! DJ-ing is something we’ve always loved doing since a young age and it’s great to be able to use it as one of our career side-lines.’’

But how did McCourt achieve such success?

He knew he wanted to be a TV presenter from the age of 12. His older brother James is a TV reporter, working on Good Morning Britain. From school – Hallam Middle and Tapton Secondary – Richard went to study media at Norton College.

He’s always been passionate about TV – ‘’an early memory was getting excited when the TV vans turned up each year for the snooker!’’ he exclaimed, still excited today.

So how and where did he start his career? ‘’Right here in Sheffield, I started in the Children’s Hospital radio station at the age of 12!’’

McCourt worked on several other radio stations in Sheffield including Meadowhall Radio and Hallam FM, before making it big when he met Dom at 20-years-old, in the BBC TV Centre in London. ‘’We’d both started there at similar ages as runners and became friends before making it on screen together.’’ Their friendship has played a big part in their success. ‘’It’s been 23 years this year and we’re still going strong.’’ No arguments or disagreements? ‘’No.’’ So, what is Dom’s most annoying trait? ‘’Dom’s a fidget!’’

He’s become a national celebrity but, what was it that transformed the once young, Sheffield boy into the comedy icon he is today? ‘’Definitely Dick and Dom in Da Bungalow as it was on BBC1 on a Saturday Morning and had a huge audience.’’ But it hasn’t been a smooth journey to success. ‘’It was a headline hitting programme as it was a little bit controversial!’’ he says, smirking. The BBC received numerous complaints, one of the most publicised was due to a birthing sketch. McCourt pretended to be pregnant before giving birth to several babies. He laid on an operating table with his legs spread open while buckets of gunge were thrown over Dom and the young contestants with dolls flying across the set.

Despite the controversy, McCourt is one of the most successful children’s TV presenters and has done many jobs over the years, but what is his favourite memory of his career? ‘’Winning four BAFTA’s definitely has to be up there but generally we’ve been so lucky with everything we’ve been offered and all the jobs we’ve done.’’

Tips for getting a TV career

Starting at such a young age and working his way up the ladder to success, McCourt knows only too well how competitive the media industry, particularly the TV industry can be. So, what should people do to kick-start their career in TV? ‘’I worked my way up. These days it’s even easier with social media to start your own channel and get some broadcasting, one day someone could see it.’’ So how can one be more confident in obtaining a career as a media star like Richard McCourt? ‘’Determination is the key, never give up.’’