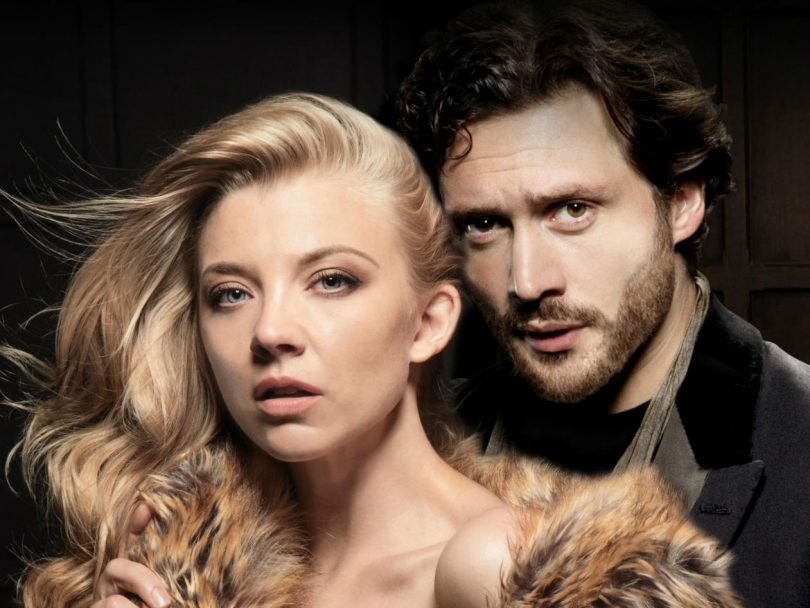 When you open your theatre programme and see the word ‘sadomasochism’ written in bold pink at the top of a page, you can’t help but question if this is really the sort of play you should have brought your mother to see…

When Thomas (played by David Oakes, star of The Borgias and Victoria) struggles to find the perfect Vanda for his play, Venus in Fur, a brash actress from Downtown Manhattan (played by Natalie Dormer, star of Game of Thrones and The Tudors) bulldozes her way into his studio. The actress (who is also called Vanda) is far from the person he wants; she lacks the sophistication and femininity to play his dominatrix from 1870, but as the play ensues Vanda becomes a catalyst of surprises and intrigue, which makes her one of the most exciting characters I have ever seen on stage.

Although sadomasochism plays a part, David Ives’ comedic drama is witty, elegant, playful, and empowering, with not a single Fifty Shades of Grey-style whip in sight. What is truly inspired about the work is the format of it; what we see is a play within a play and characters playing characters, and yet it isn’t as complicated as that sounds. Throughout most of the story, Vanda and Thomas rehearse the Venus in Fur script – Thomas’ take on Leopold von Sacher-Masoch’s 1870 novella Venus in Furs. Initially we have a very clear distinction between reality and Thomas’ play, but as the story continues the two plots begin to blur and merge whilst somehow retaining its clarity. For this reason, amongst many others, this is a play that can only be pulled off with sublime acting, which luckily Oakes and Dormer have in abundance.

#VenusInFur is the feminist tale of the Season! Eloquent, witty, overpowering, & honest AF… Go see it and take your men with u!

As a whole this is production is well-balanced. As with all things, there is the chance to go overboard, especially when you have an actress like Dormer playing such a character as Vanda. Dormer is one of Britain’s rising stars, and is well known for her sensual, intelligent characters with an agenda, and thus it was possible that the production could’ve taken things too far – by which I mean she could have been utterly objectified. I have seen plenty of productions in which the attractive and popular actors/actresses end up on stage in hardly any clothing, doing overly gratuitous things, and not for the purposes of plot but publicity. However, this was certainly not the case. Although she does appear on stage in an S&M style corset for most of the play, it doesn’t seem overly objectifying. Her outfit reveal is a moment of comedy, and from then on it simply fades into the background.

There are still plenty of flirtatious moments, like when she lifts her skirt to reveal her leg, or when she imitates Venus and reclines on a divan, but it was empowering – and at times intense – over cheap gratification. I can see how some critics and theatregoers disagree with this; to many it's still a show with a woman cavorting around with her legs out, oozing sexuality whilst portraying a steamy character for the man who has the power to cast her in the role, but there is much more to it than that. If the ending is not confirmation enough that women are the empowered force within this story, the subtle ways in which Vanda manipulates the pace of the play and Thomas’ script to always remain in a position of power speaks much louder than the shiny corset and dog collar ever could.

One of my favourite moments transpires when Vanda imitates Venus on the divan, and tensions between Vanda/Venus and Thomas heat up to the point that they are face-to-face. We can hear a fireplace crackling, and an orange light is projected over Oakes and Dormer which pushes their elongated shadows across the back wall. It was a beautifully visual moment, achieved through a simplicity which has seemed absent from the theatre of late.

Everything about this production seamlessly came together to create something thoroughly entertaining, comedic, and by the end shocking. It was clever and fast-paced, full of anticipation and surprises, and acted faultlessly by Oakes and Dormer. Their ability to switch their English and American accents back and forth had the audience talking as we filtered from out the theatre, and the high-class performance both actors gave was also a strong point of discussion. Once the curtain fell I recall quite vividly turning to my mother and mothing 'She [Dormer] is phenomenal', to which my mother had to agree (for once).

So going back to my introduction, all of concerns that were flagged by the programme were unnecessary. Venus in Fur is a true delight from the beginning to end, for both the academics who like to analyse, and those who simply like to be entertained. I can honestly say that this is one of my favourite productions I have seen to date, and have already booked another trip to see it at the Theatre Royal Haymarket next month.

Venus is Fur is running for a strictly limited nine week run: http://www.trh.co.uk/whatson/venus-in-fur/