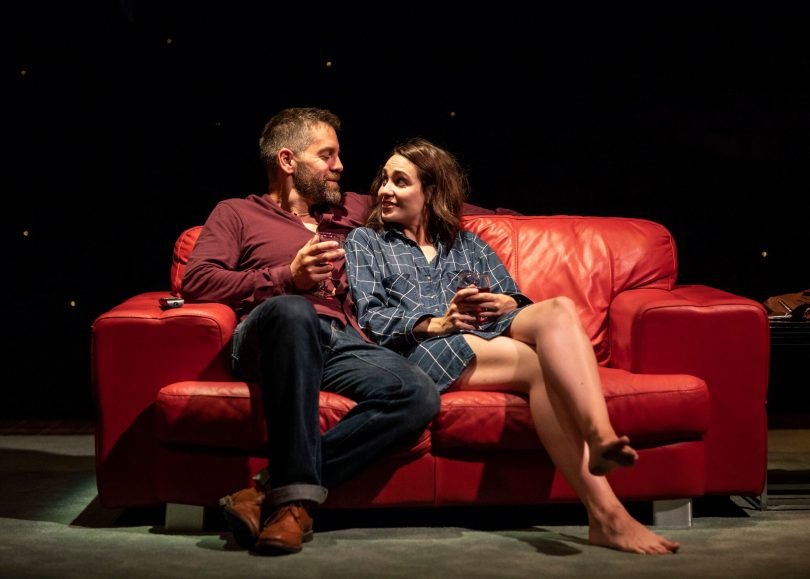 If theatre is to hold up a mirror to our own lives, then Vicky Jones’s The One (currently running at the Soho Theatre) places the stage amongst a maze of mirrors, in which we are left with a kaleidoscope of complex, brutal realities, that leaves us both speechless in shock and in quiet contemplation.

The play follows a couple, Jo (Tuppence Middleton) and Harry (John Hopkins), who find themselves blissful in a miasmic toxicity, in which, despite the fragility of their relationship, seems to have no rules. Emotional and mental abuse becomes a game; humiliation a party trick; and most perverse of all, rape is romanticised as a fantasy. For the most part, these elements seem reminiscent of the likes of Tennessee Williams and Harold Pinter, whose works explore and exploit the complexities and tragedy of abuse in a similarly gritty manner that leaves us unsettled by the end.

However, the subject matter within The One, particularly the topic of rape, becomes an even murkier subject than in the works of these post-war writers, because of the uncomfortable highlighting of blurred lines. When Stanley rapes Stella in A Streetcar Named Desire, we know it is rape, but what of Kerry (Julia Sandiford) in this play? In which her boyfriend has sex with her, knowing that she is not in the mood? This question leads to a very uncomfortable segment in which the philosophy of rape is discussed, culminating in the shocking conclusion that Kerry is in fact the rapist, for “falsely” accusing her boyfriend of ‘(a form of) rape’.

And yet, despite these moments in which the audience visibly tenses in disbelief, the play is viciously funny. The intensity of Middleton and Hopkins’s performances, coupled with the audience’s need to laugh, simply makes the moments of comedy pop. From trying to catch Wotsits whilst in the act of sex, to the almost farcical use of the romantic ‘Music of the Night’ from Webber’s The Phantom of the Opera to indicate a change in scene, laughter fills the auditorium more often than sharp intakes of breath.

This, therefore, becomes challenging to know who I should recommend the play to. Whilst there is no doubt that this play makes an uncomfortable watch at times, it is uncomfortable for an artful reason – it is not like watching a show or production, but it’s as if a wall in Jo and Harry’s apartment has been pulled down, and consequently we see things we don’t want to see, and hear things we don’t want to hear, but we cannot complain about this, because we, the audience, are the intruders. The acting is consistently superb, with both Middleton and Hopkins giving marvellously layered performances, and the direction and production has coalesced into a format that simply works. And yet, despite all of this, I struggle to say that it was thoroughly enjoyable, but it was thoroughly something that I think is worth watching.

* ‘The One’ runs at the Soho Theatre until the 25th August

** Just a general note: the Soho Theatre is incredibly LGBTQ+ friendly and provides transgender facilities. If you are a part of this community and feel anxious about being amongst the public, then please rest assured that this theatre is a safe space. The Soho Theatre also has a host of LGBTQ+ events on, which can be found here