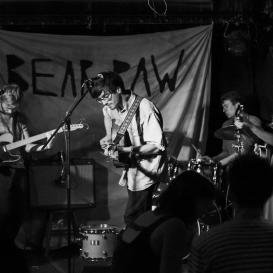 Bear Paw are a melodic Indie band who, despite having only been playing together for six months, have received coverage on Radio 2 and Amazing Radio.

The band is made up of Jon Fazal (guitar & vocals), James Hinks (guitar & vocals), Tim Kirby (drums), and Johan Petti (bass). Their newest release is a double A side – I Need a Reason and Trail of Empty Bottles. The single has been released both digitally and with a limited number of physical copies.

Starting with I Need a Reason the song has a strong guitar driven opening consisting of a relatively simple chord progression before really picking up the pace when the vocals kick in.

The lyrics itself are also worth a listen for those of you who prefer to digest what’s being said in your music and I Need a Reason tells the tale of someone searching for meaning within the most mundane aspects of their life.

A lazy comparison of the band would be the kinks, whose strong guitar-driven music is interlaced with story-telling lyrics, but it’s the type of poetic indie that Bear Paw seem to be reaching towards.

The art of storytelling

The speaker throughout the tale is searching for some form of place in life, a way to find himself. There’s obvious talent coming from the song and the lyricist should well go far – then again I’m rather fond of a song that tells a story.

In fact lyrically Trail of Empty Bottles and Broken Hearts is another story. It recalls the story of “Corinna,” a girl who sweeps through the life of the speaker disruptively drinking his beer and stealing his cigarettes, a somewhat twisted love song over-lacing once again a strong guitar progression.

Trail of Empty Bottles is definitely a bittersweet love story, the Corinna character creating a self-destructive pathway for the speaker who can’t seem to get over his former, maybe even current lover.

Their third track – By Spring We’ll Be New People is a somewhat more melancholic track than the previous, a song that’s lyrics are more sad but accompanied by a merry whistle, it doesn’t seem to lyrically fit but musically it seems to blend well.

One thing is for sure, if Bear Paw continue to grow as a band as much as they have over the past six months then they should be sure fire contestants to survive in the music industry. Listening to their tracks you’d be easily forgiven for thinking the band had been together for years and matured their sound – you certainly wouldn’t think they played their first gig in April.

I Need a Reason/ Trail of Empty Bottles and Broken Hearts was released digitally on December 15, and the band have a limited physical release of 100 copies available to buy from BandCamp. Have your say on the album in the comments section below.