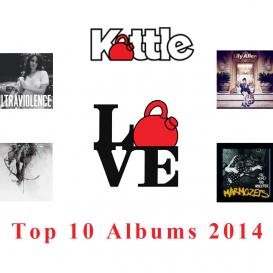 This year, we asked the Kettle Mag team to vote for their favourite albums, and then you, our lovely readers, had your pick of the top 10.

Alt-J made it into one our weekly music roundups with the release of their second studio album on Monday 22nd September. In 2012 they won the Mercury Prize for their debut An Awesome Wave and kept true to their sound with another great indie-rock album. It peaked at number one on the UK album chart and is a great way to start off our year in music.

Released in June, Ultraviolence was the mysterious follow-up to Lana del Rey’s 2012 debut Born to Die. It earned the top spot on both the UK album charts and US Billboard. You can read our full review from Gemma Hirst, which likened the album to poison ivy, for its beautiful sound and harsh lyrics. One of our voters simply said: “Who doesn’t love ‘Fucked My Way Up to the Top?”

Kasabian’s 48:13 earned a mention on our weekly music roundup and a full review from Joss Woodend, naming it the album of the summer. Taking a more experimental turn than their previous releases, it still produced some stand-out tracks. Who can forget the incredible sci-fi video for ‘Stevie’ as they live to fight another day?

Going back to June, we saw Linkin Park come alive with The Hunting Party. Having gone through some stylistic changes throughout their career, it was refreshing to see Linkin Park head back to their heavy roots this year. The Hunting Party has produced some big singles and seen the band return with a worldwide tour.

6) Ben Howard: I Forget Where We Were

It’s been a big year for Ben Howard after winning the British Breakthrough Act and British Solo Male Artist award at the 2013 Brit Awards. This album was bold and unapologetic, moving away from an acoustic feel and easy-listening towards an edgier approach, as seen in our full review from Alice Cruickshank. This British singer-songwriter took pride of place at number one on the UK album charts.

I was surprised to see Maroon 5 working their way up on our list, after we questioned whether they had lost their identity with their fifth studio album, V. In spite of the mixed reviews, it debuted at number one on the US Billboard chart. It’s no doubt a chart friendly album, and does well enough to keep the Kettle fans pleased!

Lilly Allen’s highly anticipated Sheezus showed an evolution and lyrical flair, according to our review from Paige McConnell. It went straight to the top of the UK album charts, following in the footsteps of 2009’s It’s Not Me, It’s You. One voter said:

“Lilly Allen’s critical / satirical take on cultural developments since her last album are on point. Her voice is fantastic, and the songs are catchy as hell!”

3) The Script: No Sound Without Silence

Back in September, we had an excited review from Karishma Jobanputra for The Script’s fourth studio album. No Sound Without Silence saw a change of style with a few worthy tracks. While I was impressed with the innovation of recording their material on board the tour bus, the album still received fairly mixed reviews. Never the less, you liked it enough to see it climb the ranks of our top albums.

2) Marmozets: The Weird and Wonderful Marmozets

This is without a doubt my favourite album on the list, so I was pleased to see some extra votes of support for Marmozet’s “raw edge”. In anticipation of The Weird and Wonderful I awarded these Yorkshire rockers the title of Kettle Band of The Week. They’re an old favourite who just keep getting bigger and better as front woman Becca Mcyntire takes on worldwide domination as one of the best women of rock. If you haven’t heard them yet, then I have to wonder if you’ve actually been living under a rock.

It may have been a close call between many of our contenders, but with a staggering 25% of the public votes Taylor Swift takes the top spot. This album saw not one, but two Kettle reviews, shocking me with the sudden musical interest of our team. One voter said:

“Taylor has a really different sound in this album where she is a lot more poppy but the songs are all really catchy. ‘Style’ and ‘Blank Space’ are just so good!”

Being voted our best album could just be a personal vengeance against me, but here it is. I just don’t get it!

Have a great Christmas, and a Happy New Year! I can’t wait to see what 2015 brings the music world…