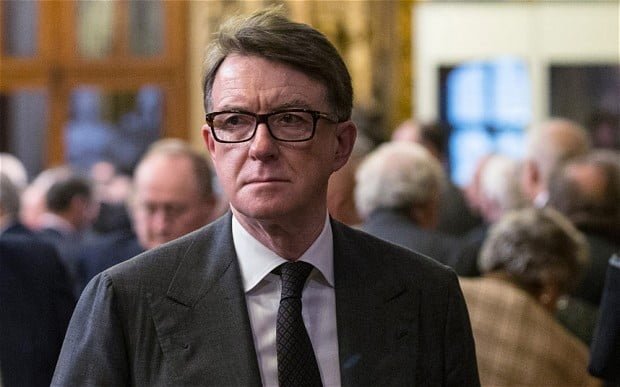 Remainer Lord Mandelson, writing for The Independent declared his confidence in Theresa May proposing a second referendum to “untie her hands” from the “Brextremists who are holding her hostage”. Calling the Chequers deal a “half-in, half-out plan”, Mandelson condemned the ministerial agreement as “an attempt to remain close to Europe, full of concessions and compromises, and therefore a million miles from what they expected.”

Calls for a second referendum?

As a result, he expounds the plan will deny Britain the economic benefits found in being a member of the EU, nor will it offer freedom for post-Brexit Britain to market its economy independently to the rest of the world. Speaking to Sky News (see video below), he stated: “We are light years away from what people expected or were promised at the time of the referendum. “The whole negotiation over the last two years has been a complete shambles, not surprisingly people are disillusioned.

“For many that disillusionment has turned to anger and far from reuniting the country the divisions within the Government and the Cabinet, within the parties, between the parties and in the country as a whole.Those divisions are as great as any and the only way forward for Mrs May is to continue the negotiation and put the best deal she can find to a peoples vote.”

“The only way to give democratic legitimacy to the final deal and to get approval is to put it to such a vote.”

“The people now want to make an informed judgement and choice between what is on offer and the benefits we already had in the European Union. If she promises a People’s Vote it will strengthen her hand against the Brextremists in her own party.”

Labour peer Lord Mandelson says the government's #Brexit negotiations are "a shambles" – and the only way to give legitimacy to the final deal is to put it to a public vote pic.twitter.com/a1n6ql0Yyi

Justine Greening supported Mandelson’s adovcation for a Final Say, becoming the first prominent Conservative politician to back Mandelson’s distaste of the Chequers blueprint, claiming the negotiations were “already dead” and would cause a “disastrous decade of continuing division.” Euro-sceptic Jacob Rees-Mogg, followed Mandelson’s criticisms with his own: “The Prime Minister has said for a long time that no deal is better than a bad deal.”

The chairman of the European Research Group of Tory MPs continued: ““If the Government cannot now show that it can deliver a workable deal based on WTO terms then it is not competent. “It is not a good look for the Government to appear fretful, weak and incompetent, but this seems to be the way it is approaching the idea of leaving on WTO terms.”