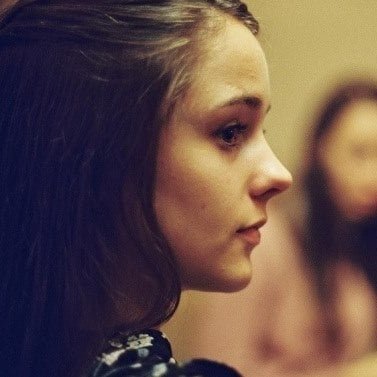 Never has a film hit me right in the face more than Apostasy. It’s brutal, It’s honest, it was damn well needed. Society has its quirks, its warped ideologies, its need for change, but this, this makes it hit home on a whole new level. We as creatives have a job to challenge what we believe is morally corrupt. Music, art, film making, it all has purpose in sending out a message and trying to awaken a sleepy construct. We all have this power, we must use it, we must embrace it, just as Dan Kokotajlo has done here with Apostasy.

#ApostasyFilm this is not fiction, it’s the reality I was raised in and what I rejected when JWs forecast of 1975 Armageddon didn’t happen. A cruel cult that destroys lives. See the film and understand!

I am a simple person, though I live my life in a gorgeous array of technicolour, my needs are basic. I want to live, I want to love, I want to die knowing I lived like to the maximum. So why would I ever willingly want to put myself in to a position where I severely limit those opportunities? I guess it is something I wont fully understand as someone who hasn’t grown up in a cult like religion, which makes that question a little complex and suggests being a follower is a choice, but this is where it is difficult. Is there ever really a choice? To me it seems simple. But again I have never had these beliefs enforced upon me.

Apostasy explores the complexities of the Jehovah’s Witness, it doesn’t shy away from the nitty gritty of a rather alarming set of rules and regulations. No blood transfusions, no birthdays, no chance of a fulfilled life. It is a concept I am still yet to understand. ‘Love is conditional, it has to be earned’, a real line from a film based on real people. This isn’t some dark fantasy flick, this is based on the real beliefs of a system which would rather let their child die than allowed them a blood transfusion. A group of people who believe they will be saved by Armageddon. How can this be, in 2018 we are still witnessing these horrors in modern day society? Religion seems to have it’s own set of hypocritical laws untouched by the Government. It can pretty much do what it wants under the guise of a religious belief, there isn’t anyone who can stand in their way. He who dares loses.

After I watched Apostasy, I found myself questioning, analysing and discussing the nature of these people and why they would want to follow Jehovah. To me it is a scary concept, they don’t directly affect me but they still terrify me. The day after I watched the film I had a leaflet hand delivered to my place of work, it detailed why I should convert, why I should follow Jehovah. It was a coincidence of course, shook me nontheless. I felt like they knew. That is the discomfort I had throughout the film, the reality dawning.

Over the past six months or so, Apostasy has been doing the rounds at film festivals and in theatres all around the world. Audiences have loved it, critics have labelled it a triumph in British film making, a debut master piece from Director Dan Kokotajlo. A small budget with a big impact. Thanks to the authenticity and polished portrayal by Siobhan Finneran, Sacha Parkinson and Molly Wright amongst many others, it has become a worthy contender for film of the year if not the past few years. Former members of the Jehovahs community have praised the film for its accurate and sheer gutsy depiction of a rather limiting and quite frankly fearsome group of people. The control the elders have and the ease at which they can turn their back on those who don’t comply is not what I envision being part of a community is all about. We should support, love and honour each other. That is what a community is all about.

So thank you to Dan and the rest of the crew for starting off the conversation, thank you for awakening my mind and for making me think more about how we conduct ourselves. Your intension may have been to shed light on the community but it has achieved so much more. Apostasy isn’t your Saturday night chick flick, but it is essential,powerful viewing. 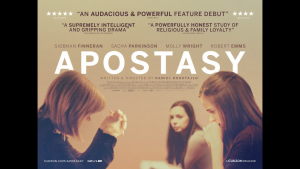