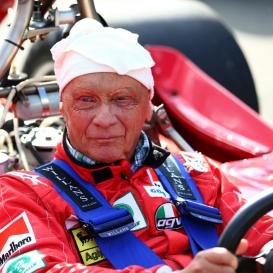 Lauda: The Untold Story promised so much but sadly it didn’t deliver as much as was hoped.

The documentary, written, produced and directed by Austrian Hannes Michael Schalle, tells the apparently untold story of three-time F1 world champion Niki Lauda who suffered a horrendous crash at the Nurburgring in 1976, leaving his lungs and skin badly burnt.

The story of Niki is one quite well known to most fans and was recently depicted in Ron Howard’s feature film Rush which delved into the rivalry between Lauda and his British adversary James Hunt.

Schalle spent years before the release of the film looking through old fan footage, in an era when people could wander the paddock and film freely. Parts of the documentary are definitely unseen footage and it is certainly interesting to look at the medical responses to Niki’s injuries as well as footage of Niki’s home life.

The most interesting parts of the documentary come from the interviews. There are current interviews with Niki, who is now a chairman of the Mercedes AMG Petronas F1 team, mixed in with old archive footage of him both at home and on the track. Interviews from others such as the medical team, Niki’s old neighbour and Formula 1 drivers shed more light on the incident and on Niki as a person.

As the film is Austrian it does not always come across as suitable for an English speaking audience. There are subtitles provided but they often move from the top of the screen to the bottom as name captions are inserted whenever a new face appears on screen. This can be quite distracting as reading who and what the person has done means you miss a sentence of what they’re saying.

At one point in the documentary archive footage of Hunt and Mario Andretti is used. Both are speaking English but a German voice is dubbed over the top with English subtitles then provided. The editing department quite obviously made a mistake here as aside from this particular section all other English speaking was kept as it was when recorded.

The documentary quite often had too much happening with the visuals and the subtitles and it was quite distracting as you couldn’t fully take in everything that was being shown. A home viewing of the film would probably be better to ensure pausing and rewinding so you don’t miss out on anything.

Four years ago this week saw the premiere of SENNA in São Paulo, Brazil. A truly memorable night. #SENNAsempre pic.twitter.com/tA9THKCfq3

The most interesting section of the documentary for me was a part on safety in the sport, with drivers past and present talking about the changes it has undergone and how many lives were lost unnecessarily. In the modern era it is often forgotten how dangerous a sport Formula 1 is and though there hasn’t been a death since Ayrton Senna’s in 1994 Marussia driver Jules Bianchi remains in a coma after his horrific crash in Japan in 2014.

Current Mercedes drivers Lewis Hamilton and Nico Rosberg also make an appearance, with Nico giving some great information about the workings of the car and how he keeps himself physically fit to withstand the pressures inside the car. It was these informative insights that really made the film, which oddly didn’t actually feature anything about Niki.

The film was definitely interesting in giving a different insight into the events of Lauda’s life, discussing his airline Fly Niki, the planes of which I saw when I flew to Vienna for the Austrian Grand Prix but didn’t realise were attributed to him. The documentary is worth a watch for all motorsport fans but it probably isn’t an essential part of your film collection, like the award-winning Senna is.

Join us for #Lauda: The Untold Story with a Live Q&A hosted by @suziperry on 2nd July: http://t.co/DnPeF04SAI pic.twitter.com/TLZpCNdhoy

An awkward Q and A

Following the screening was a live Q and A session, hosted by BBC F1 presenter Suzi Perry. Schalle was with her, alongside safety car driver Bernd Maylander (who also featured in the documentary) and ex-F1 driver Giancarlo Fisichella.

What followed was twenty minutes of awkwardness where Perry deserves huge recognition for keeping the entire thing together. Schalle didn’t talk much and all we really learnt from him was that as a child the Nurburgring incident really played on his mind and he grew up wanting to tell Niki’s story. It seems a slight shame that Rush was released so recently as the documentary was in the pipeline from 2010 and seems to have been dampened somewhat by the feature film.

Fisichella could have given the audience so much as Perry spoke to him about crashes and what it feels like physically on the body of a driver but he didn’t seem to entirely understand her, making up answers to whatever question he had heard. A few audience members chose to direct their questions towards him, a huge mistake as they had to be repeated a few times for Fisichella to understand what they meant before he answered inadequately.

Maylander was the only interesting part of the Q and A as he gave us an insight into what it’s like to be a safety car driver and his routine over a race weekend. We needed more from the others but it was quite a relief when it was over. The cinema screening was relatively empty at the start but by the very end only about seven people remained, most having left during the Q and A.

For any fan of motorsport the documentary is a must despite it not quite living up to expectations. The DVD will be released in the UK on 6 July.