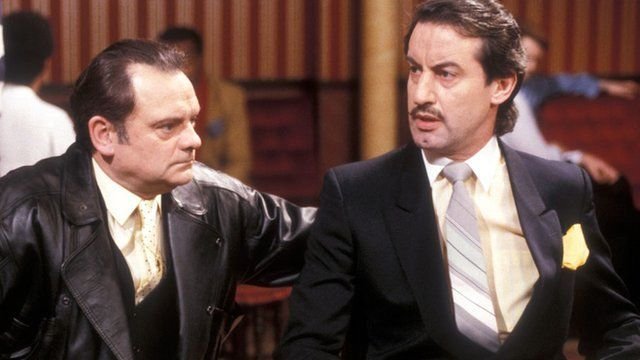 On the back of our article that asked questions of modern day sitcoms, we felt it only appropriate to get the opinion of someone who featured in Britain’s best loved comedy and is remembered

On the back of our article that asked questions of modern day sitcoms, we felt it only appropriate to get the opinion of someone who featured in Britain’s best loved comedy and is remembered as one of the greatest TV characters on the late 20th century.  We caught up with John Challis otherwise known as Boycie from Only Fools and Horses, he talks to us about that laugh, his memories, his writing and modern day comedy.

Hi John, thanks for talking to us! Let’s start with burning issue, what do you think about the state of modern day sitcoms?

It’s all a bit derivative, there is nothing new under sun and I think that is down to Only Fools and Horses setting a high standard. I don’t like this new trend for aggressive, embarrassing and demeaning comedy.

Are there any sitcoms out there that tickled you?

I enjoyed the first series of Miranda, it was innovative and she does the best pratfalls! However for some reason and I can’t put my finger on it, it’s become irritating.  The same with Mrs Brown’s Boys which made me laugh out loud at first, but the ‘feckin this and feckin’ that has got on my nerves. My favourite has always been Dylan Moran’s Black Books but then I’ve got a weird sense of humour!

What about the new attempts by the BBC (The Wright Way) and ITV (Vicious)?

I had such high hopes for Vicious because the main characters are played by some of our greatest actors (Sir Ian McKellen and Derek Jacobi) but they have been let down by a predictable script .I watched The Wright Way for the first time only this week and although I think David Haig is very good, the script plods along like pushing treacle upstairs.

How difficult do you think it is to right a good comedy script?

Everybody thinks it’s easy to write comedy but I get sent many scripts that don’t make me laugh at all. Personally I don’t like mention of bodily functions and there are a lot of those! John Sullivan (creator of OFAH) hardly ever resorted to graphic descriptions; things like that were inferred. It’s often said but OFAH and The Green Green Grass were always the comedies you could enjoy with the family without worrying that you would be embarrassed or shocked.

So do you think a good drama script is easier to come by?

I think there is a wealth of material available for writing a drama and an impressive list of Britain’s finest actors to choose from, whereas it’s notoriously difficult to write comedy and also hard to find those actors with ‘funny bones’. If someone offered me a part in a decent gritty drama I would jump at it.

So you’ve been sent a few scripts but never fancied a returned to the screen?

Yep but I haven’t been specifically offered a part until recently. Derren Litten wanted me to be in an episode of Benidorm and I was really up for that but sadly I was not available and they couldn’t work around my commitments.

You’re best known for playing the second hand car dealer Boycie from OFAH, what was it like to be part of the country’s best love sitcom?

Brilliant, looking back on it OFAH is like having another family for whom we all feel great affection for.

Boycie’s trademark laugh is still loved by many today, how did come about?

In one of my early episodes the script direction was ‘Boycie Laughs’, so I just came out with this machine gun laugh that I remembered from a woman in my local. Everybody, the cast and crew laughed and in the next episode the script said ‘Boycie does one of his laughs’ and that was that!

Can you tell us a bit more about the relationship between Boycie and Del Boy (David Jason); it’s quite a feisty one isn’t it?

Del aspires to Boycie’s outward trappings of success. Boycie’s always flashing the cash and he feels very superior to his old school chum and needs Del to remind him how fortunate he’s been! They need each other to bounce off but I don’t think there’s a great deal of affection between them.

With some many classic episodes which one stands out for you?

My favourite episode is the Jolly Boy’s Outing for all the happy memories and every time I see it I can’t believe that my mate Ken MacDonald (Landlord of the Nags Head) has passed on. In Sickness and Wealth was another favourite and it was the episode that was the hardest to film because none of us could stop laughing. The touching of the hands around the table, the facial expressions and the revelation that Boycie’s name is Aubrey and of course, the ‘I am here’ line! Wonderful stuff and some of Sullivan’s best writing.

The first episode his our screens back in 1981, did you expect it to still be loved 32 years later?

The viewing figures for the first two series weren’t brilliant and it was a slow developer, so we certainly didn’t think it would go further that two or three series. I don’t think we will ever see such a much loved show; we’ve all grown up with it and the characters are like family.

Boycie returned to our screens in 2005 with Green Green Grass which ran for four series, would you considered a return even without the well missed John Sullivan?

We were told that Series 5 would go ahead but after six months came the news that the BBC didn’t want us after all. It was a massive disappointment. Even though some of GGG was written by other people, including Sullivan’s son Jim, there couldn’t be another series without the approval of the family.

So what are you up to these days then? I understand you’re currently touring the country with your autobiography?

That’s correct! My weekends are taken up with Waterstone’s book signings and my one man show Only Fools and Boycie which is a trip down memory lane with lots of stories about my long and colourful life! The list of venues is on my website.  Both books and the show have been very well received but it’s hard work! I’m also writing my novel called REGGIE about a couple moving to the countryside and the bizarre situations and eccentric people they encounter!

I have been asked. No thank you. Marlene, however would do it in a trice but she’s a trained dancer! I am not as fit as I once was and I think the relentless regime would take its toll on me! Anyway, who wants to be in such close proximity to all those scantily dressed young women sweating and panting all over you? A man like me? I don’t think so!

You can see where John is next by popping onto this website www.wigmorebooks.com, where you can purchase signed copies of his autobiography and autographed prints! Also follow him on Twitter @BeingBoycie