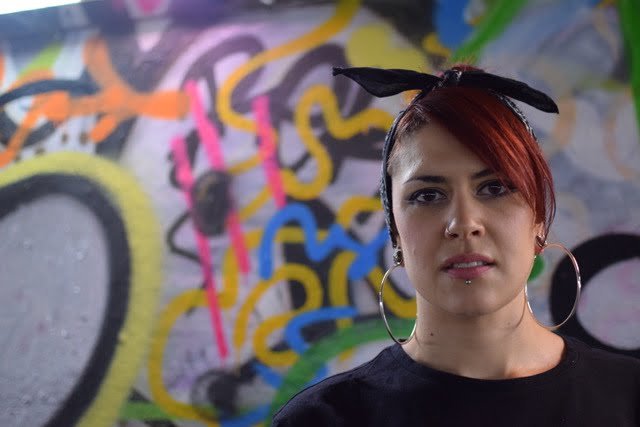 Written by Georgiethejourno
Last Friday saw the release of their latest EP ‘Shutup’ and now they are busy kicking ass at various dates across the Country, for London based punk band Millie Manders and The Shutup it’s an exciting time. The EP has been receiving great reviews from fans and new listeners a like, but what is it all about, where did it come from and what else do they have planned for the rest of the year. Well you can find out right here … We caught up with lead singer Millie Manders to find out what she had to say …

It seems like a busy time for you, how are you feeling about the EP release?

I’m excited! It’s been such a long time coming and we all feel it’s really right for us in terms of timing and sound as a band.

Can you tell us the meaning by the EP? What do you want people to take away from it?

It’s quite multifaceted in terms of the name of the EP. The obvious one being a hail to the band name, but it’s also a shout out to those who feel silenced, or don’t have a voice, especially with some of the issues raised in its lyrical content
I’d like people to come away from it really knowing who we are as a band, and to maybe make people think a little.

What are your plans for the rest of the year?

We have around 20 dates still before Christmas so it’s a lot of touring, but we are also looking to start writing again. We’ve set some time aside for that, and I’m really looking forward to it!!

When you were growing up, which artists really influenced you? What was it about them that made you stand up and listen?

I had a huge variety of influences as a kid. As a young clarinetist all I wanted to learn was ragtime and big band jazz. My Mum bought all the classical and RnB classics on CD and I fell in love with Holst, Mozart, Aretha Franklin, James Brown and Otis Reading. My Dad bought all the new music coming out so I was hugely inspired by Prodigy, Cypress Hill and Red Hot Chilli Peppers and then once I started finding my own way Skunk Anansie, No Doubt, De La Soul and Green Day. I’ve always loved something that made me really feel. And sounds that we’re different. I’ve never been one for soppy love songs either. Big Voices, unique sounds. That’s my bag.

You have quite the reputation for blending genres. Do you think genre is word we no longer need to use? Does it really matter about putting music in a box anymore?

I think genres are still relevant. Most people still sway towards one sound or another and so being able to find stuff you like through key searches is important, but I think it’s also important not to HAVE to be pigeon holed. We are, most notably punk wether it is in attitude or style, and we like it that way, but we want to be able to flex our musical muscles whenever and however we like.

What would you say inspires you the most in music? What in the world has to happen for you to be in the best creative space?

I have to have time to have head space and that doesn’t happen often. A period of time where I don’t have to manage the band or do other work.
I can’t work in a messy environment no matter what I’m doing, and I’m most often inspired by things that make me angry, wether it’s personal or social or what.

There seems to be a lot of female empowerment occuring in the world right now. What is your take on all of this?

I think it’s brilliant! As long as it remains about equality the empowerment of women should absolutely continue to happen. It’s an incredibly exciting time to be alive for lots of social awakenings and evolutions/revolutions.

If you could describe yourself as Disney Character which would it be?

Top 5 things you must have with you on tour?