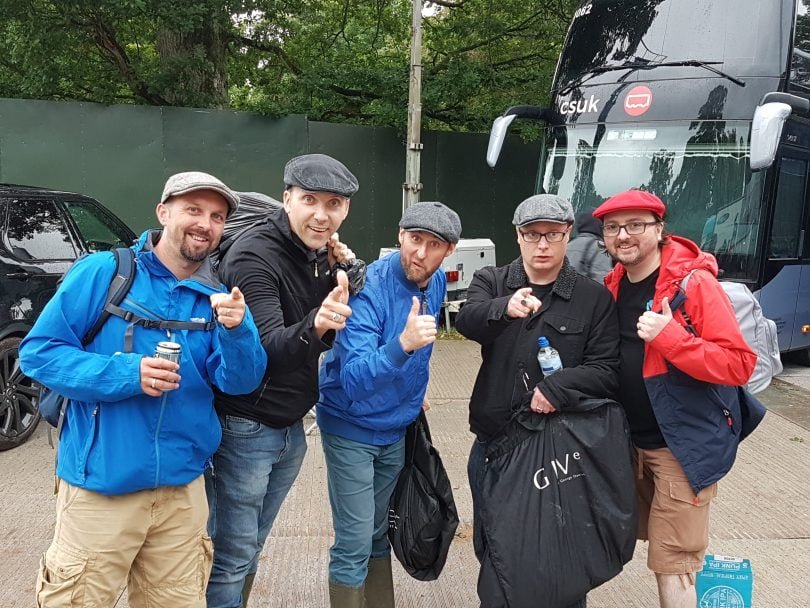 I can’t think of many places on the planet where you could stumble through a hidden forest to find communal tubular bells, people inspecting the inside of a spaceship, acrobats in a rotating cage, graffiti artists and of course an Elvis impersonator singing Nirvana classics. All this and more is attainable at Kendal Calling festival.

Yes everyone sang along unashamedly to crowd favourites James and Ocean Colour Scene both in simpatico and with glee, but dig a little deeper and Kendal has much more than a nostalgic blast of 90’s Brit-acts. Whilst I was amazed by how good Simon Fowler’s voice still is, I was a little disappointed by the sound quality whilst James were playing. I know it has long been a bugbear of many music fans that sound is limited for the earlier acts and then hoicked up for the headliners, but here it made the sound not only hugely bass-full, but also caused it to pan across the speakers. Noticeable enough that people spoke openly about how shocking the sound technician was.

Having travelled up from London, I don’t think that I have seen a drop of rain in months as global warming drives this crazy heat wave in the capital, so ignoring the weather man might have been a mistake as the classic Lake District climate took to bucketing it down all weekend. This wasn’t going to stop me though, so I got my kit off to dance in the rain outside the Tim Peaks Diner whilst Tim Burgess span the decks.

My entire wardrobe may have been drenched, but skin is waterproof, so I donned a pair of gold hot-pants and hit the dance tent for the Hospitality Records take-over. It seems that new acts are thin on the ground at the Kendal Calling main-stages, but nobody cares when grooving away to the likes of London Electricity and Basement Jaxx.

Sunday was the big day for me. With more sing-alongs to the Lancashire Hot Pots: a cabaret of cheesy and comical rhetoric about northern folk. I caught a touch of comedy between acts and also checked out the quirky electronic coconut shy with their 21st century take on some classic arcade games. A hand cranked peep show, which superimposes ones face onto a number of cult classic film scenes gave me a chuckle, or the dance machine where you slap the arse of a mannequin; this could have artistic connotations about appropriate sexual contact, but I just took it to be a bit of fun, as I did the whole festival.

When I wasn’t prating around pretending to be Jack Nicholson in The Shinning or Jack from Titanic, I was conducting some important journalism, trying to carry out interviews with a hand-puppet named Tyreese which people didn’t really take to, so instead I went to check out some new acts.

I know The Blinders have been around a while, but I hadn’t given them much of a listen until now and they really are a class act which morph a mature version of The New York Dolls, a smattering of Joy Division, Jim Morrison-esque spoken lyrics and guitar riffs that wouldn’t be out of place in a Quentin Tarantino movie.

Honoured to close out Kendal Calling this weekend. Till next time pic.twitter.com/1NzqQ9Dyi9

The hunt for fresh artists continued and as I wandered by the Yam Riot stage the sultry sound of a beautiful siren beckoned me not only inside the tent, but all the way to the front barrier. Laura Hayden may be my new crush and despite her idolatry of Chrissie Hind, I was reminded of that time that I got to see Debbie Harry at this very festival. Either way, a man that is often unconvinced by pop was really converted by this floaty and yet edgy act. Think Blondie meets Goldfrap.

I think Peter Hook epitomises the festival, he is old, Northern, has a rugged charm about him; all of this can be said about Kendal and they both know how to rock.

I can’t think of any other band with two bass players and the sound was immense. By contrast, I saw New Order last year and it is the only gig I ever walked out of. In the battle of Hookey V’s Bernie, I have to say that Peter Hook and the Light are smashing it and it appears to be paying dividends for them as they have been on a world tour for the past couple of years now, enjoying gigs in both North and South America, with Peter Hook even being invited to play alongside huge stars at the Smashing Pumpkins 30th anniversary concert this week.

The only thing I wasn’t sold on at Kendal Calling was the Libertines. My goodness they were shocking! I think if you enjoyed that set, you had to have been as stoned as Pete Docherty was as he thought throwing an acoustic guitar into the audience was a good idea. Mind you, if I was playing that shit, I think my instinct would be to throw the guitar as far as possible.

Someone had to tell him a couple of tracks in that he had been out of tune the whole time and the band as a whole were about as tight as a wizards sleeve (also another name for ‘your mum’).

I just feel sorry for Docherty now. His face is as bloated as his ego always was and instead of disappearing into obscurity as a musical genius, I think he ought to be remembered more for the missed shows, the drug abuse and the lack of respect that he shows his fans.

Looking for a fun hassle free way to spend a weekend? Happy to brave the inclement Northern weather?

I will see you in the fields next year….