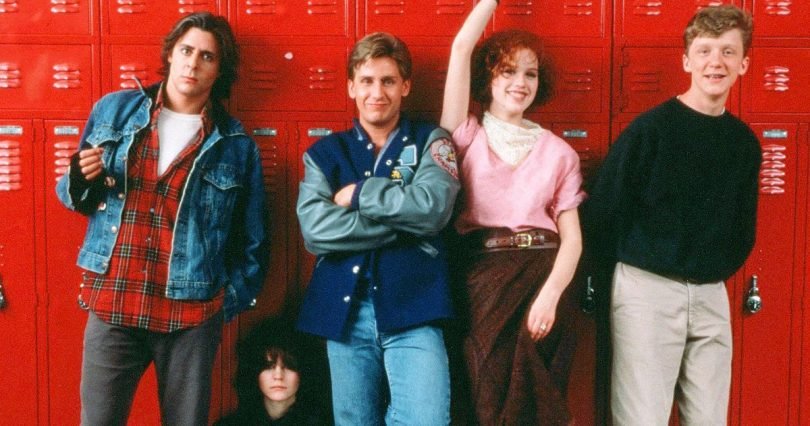 When you think of 1980s teen movies, I’m sure you probably go straight to an American high school, standing by the lockers, looking into the far distance while A Flock of Seagulls blares out in the background. That image is burned on the mind of everyone who grew up watching the romantic comedies, coming-of-age slice of schmaltzy bubblegum pop culture. Here is a list of five of the best from the Decade of Dreamers.

Forget about the doom and gloom engulfing the planet, stay indoors and stuff your face while enjoying the circus of amusement and entertainment that begins with…

The Psychedelic Furs tune rocks the room, vibrating the vibrant eye make-up and leg warmers so synonymous with the 1980s. Molly Ringwald’s Andie is a lower-class student who goes on a date with Blane, an immaculately quiffed man about town. In the end, it turns out that what Andie was missing was her best friend, Duckie, played by the lovelorn Jon Cryer. ISN’T SHE PRETTY IN PINK? This is a thumping film with a pumping soundtrack. It is, quite simply, incredibly mid-1980s.

It might make you shed a tear, it will definitely make you laugh and could invoke memories of your teenage days, trying to ask people out while at all times trying to look cool and not break the defined social boundaries. Quality.

Okay, so this is only just a teen movie, but the sentiment is still the same. Based on a short story by legendary author Stephen King, four friends travel through 1950s America, looking for a body of someone they know. I NEVER HAD ANY FRIENDS, LATER ON, LIKE THE ONES I HAD WHEN I WAS TWELVE. River Phoenix plays Chris, a member of a street-tough family of thugs and jailbirds who is desperate to make a better life for himself. Alongside his best friend, Gordie, they are the tender heart to the film driving along the story with their heartfelt admiration for each other. T

he scene when the fat kid eats the pie and is then sick on everyone will always be iconic. If you haven’t seen it then what have you been doing with your life?

It’s another Molly Ringwald movie about teen angst, love and confusion all wrapped up in the warm comedy of writer John Hughes. After everyone forgets it’s her birthday, Samantha hopes to find a boyfriend who will celebrate with her. She is forced to reject the geeky, over-confident Ted in one of the most hilarious scenes of any film of the decade.  Once again, we’re faced with the sugary sensation of young love and the sour texture of rejection

The film is punctuated by a soundtrack of epic proportions, Spandau Ballet’s song ‘True’ is an absolute banger. You don’t need to wish too much from this film. IT’S ALREADY COME TRUE.

I’ve started to realise that you can’t talk about 1980s movies without either John Hughes or Molly Ringwald- they just keep coming up. This is the one that you need to watch the most. Don’t you forget about it. It is the story of a group of very different high school kids that have an all-day detention on a Saturday morning, under the watchful eye of the bitter, angry Assistant Principal Vernon.

This is the very definition of a coming-of-age film, as the characters not only learn about each other, but they learn about themselves, too. Famed for bringing the so-called ‘Brat Pack’ generation of actors to the mainstream, this is a fantastic study into how different personalities connect and how opposites attract. It also features some of the most iconic scenes in cinematic history- the final scene, for example, where Judd Nelson puts his fist into the air. DON’T YOU FORGET ABOUT ME.

1986 was a year of tragedy, Chernobyl nuclear plant exploded into radioactive ruin and Diego Maradona performed his infamous ‘Hand of God’ trick to cheat his way past England in the World Cup. However, on the plus side, this absolute gem of a film was released. Yet another John Hughes joint, Ferris Bueller is an intelligent high school senior who uses computers and evasion to miss a day at school, roping in his hypochondriac best friend Cameron for good measure. SAVE FERRIS. You’ll have to google what ‘breaking the fourth wall’ means but Ferris talks to the camera- or, to us- about his intentions and reasons for skipping school to go and watch baseball, drive a high-quality Ferrari and have the best day of his life.

The film is probably most famous for the protracted scene at the end where Ferris has to get home before his parents, he, of course, pretended he was unwell so they would not be suspicious. It is a delight. Again, if you haven’t seen it then there’s something seriously missing from your cinematic education.

So, there you go. There were loads more I could have put in. The 1980s is full of wonderful films. It was a tough choice to leave out Say Anything, Back to the Future and The Goonies but you can make up your own minds on what you would have done! Share the post and add your own in the comments if you think there are films that should have had an honourable mention.

Why not reacquaint yourselves with some classic, cheesy 1980s films. It’s not like anyone has anything better to do, right now.