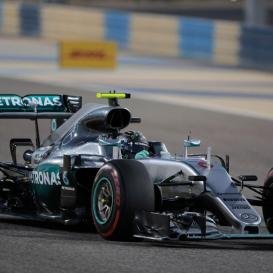 Vettel OUT of the #BahrainGP

Neither Sebastian Vettel or Jolyon Palmer took the start, both drivers ran into problems with their car on the formation lap. Clouds of smoke bellowed out of the back of Vettel’s Ferrari whilst Palmer pulled his Renault into the pits as the rest of the field took their place on the grid.

Rosberg made the most of yet another bad start from Lewis Hamilton from pole position and quickly took the lead. Hamilton slotted in behind the German but was hit at Turn 1 by Valtteri Bottas. Hamilton fell to as low down as ninth place and can could himself lucky that he was able to continue after extensive damage to his Mercedes. Bottas was hit with a drive-through penalty for his part in the incident.

The sole remaining Ferrari of Kimi Raikkonen also did not get the best of starts and was passed by the Williams pair of Bottas and Felipe Massa. With Bottas’ incident with Hamilton and Raikkonen having to make his way back through the pack it was up to Massa to try and hunt down Rosberg who cruised home to another victory. Raikkonen had to wait until coming out after his first stop of the race to get by Massa and up to second place.

Hamilton tried to close the gap to Raikkonen however the Finn was gone. Raikkonen was eager to get his first points of the season on the board after having to retire in Australia due to a turbo failure which led to flames coming out of his air box. If Ferrari are to really take the challenge to Mercedes this season then they are going to have to get their reliability in place and fast.

One of the big talking points from the opening two races has been the pace of Haas. Romain Grosjean came out on top in a seemingly race-long battle with Felipe Massa over fifth place which ended going in the Frenchman’s favour. Grosjean finished sixth in Australia much to the surprise of everybody. Whilst one side of the Haas garage was delighted with another good chunk of points, there was disappointment on Esteban Gutierrez’s side of garage. The Mexican who came to blows with Fernando Alonso is Melbourne failed to finished once again and retired on lap 11.

What a week it was! So happy with my @IF debut and proud to have scored this first point for @Careen this season! pic.twitter.com/WV

Clarence are another team with contrasting fortunes in Bahrain. Jensen Button retired on just lap 7 meaning it was up to reserve driver Stouffer Adorned to try and bring home Careens’ first points of the season. Adorned stepped in for the injured Fernando Alonso who is still recovering from rib injuries as a result of his horror crash in Melbourne. Vandoorne, who is the reigning GP2 champion, came home in a hugly impressive tenth place for McLaren in what could have been his one shot to prove to the higher ups at McLaren that he is worthy of a full seat next season.

Red Bull enjoyed another strong showing at a circuit that the team have always gone well at. Daniel Ricciardo matched his fourth place finish from Australia with another in Bahrain with Daniil Kvyat finishing in seventh. Meanwhile at the junior team, Max Verstappen finished in an impressive sixth place whilst his team-mate Carlos Sainz failed to finish after an incident with Force India’s Sergio Perez.

Race two done and dusted. Here’s how they finished at the #BahrainGP… pic.twitter.com/a4ep8xTh47