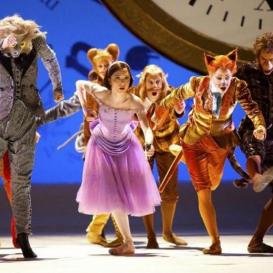 Arriving at the Royal Opera House in 2011 as the first full-length story ballet to be created since 1995, Wheeldon’s Alice’s Adventures in Wonderland did not disappoint. And now, three years one, it still creates the same sense of originality mixed with tradition that makes this ballet such a pleasure to watch.

It’s difficult to tell a story as complex as Alice’s Adventures in Wonderland without words, but Wheeldon’s choreography allows Sarah Lamb to tell Alice’s story magnificently.

The opening scene shows Lewis Carroll (played by Alex Campbell, who stepped due to Ricardo Cervera being injured), attending the Liddell family’s garden party where he is entertaining three young girls. One of these young girls is Alice, and after a fallout with her mother and father, Alice finds herself falling down the rabbit hole and into the Wonderland we all know and love.

The Red Queen is an easy favourite. Drawing laughs from the audience with her slapstick version of Sleeping Beauty’s ‘Rose Adagio’ and being carted around in a huge wooden red heart, threatening to off anybody’s head who stands in her way. Yanowsky’s ability to battle with anything that Wheeldon’s chereography throws her way is evident, and it truly is the feat of a fantastic dancer to be able to dance terribly on purpose.

I sometimes fear with Alice’s Adventures in Wonderland that the story is lost among everybody’s love for the Mad Hatter. And although McRae did receive probably the loudest applause of the evening, the fact that the character was confined only to his specific part allowed the ballet to develop some of the undeservedly less-loved characters that the story has to offer.

Federico Bonelli’s Jack/Knave of Hearts was gentle and incredibly sweet. He provided the perfect supportive role to compliment Lamb’s Alice. And their dance together was discernible enough to become a motif without it being overdone.

Joby Talbot’s music is a wonderful score that, combined with Bob Crowley’s set designs and the cast’s portrayal of each character on stage, removes each member of the audience from their surroundings completely and emerses them into Carroll’s upside down world of utter nonsense.

The music provides a constant automated ticking noise that gives the illusion of time running by quicker than it would seem – something that I often think happens in dreams.

Crowley’s design shows multimedia at it’s finest. We saw Alice fall into a real rabbit hole before watching a cartoon version of her fall through a swirling spiral of time and space on the wall behind, before she and the White Rabbit sail across the stage on a real boat as a screened landscape moves behind them, giving the illusion of travel.

Again and again, this combination of the old and the new help make an innovative yet startlingly traditional ballet.

I feel that this ballet receives the same audience reaction as the book did. People who don’t read still enjoy the story of Alice’s Adventures in Wonderland, and people who don’t enjoy, or understand, the ballet will definitely enjoy this.

Visually, musically and in terms of design; the whole thing is stunning. A true Christmas treat for all the family.