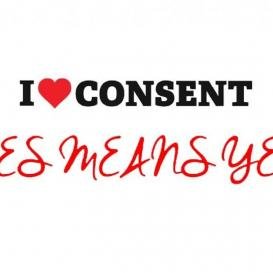 Why is this so important? Because consent for sex is always required and sex without consent is rape.

This year, California became the first US State to introduce a “Yes means yes” law, surpassing the previously held “no means no” which suggested that only a firm “no” indicated a lack of consent.

The focus of the bill looks at how universities handle rape allegations and investigations into reports of sexual assault. This is something echoed across many universities who promote their own consent policies.

The ‘yes means yes’ definition of consent requires “an affirmative, conscious and voluntary agreement to engage in sexual activity,” from each person involved. This must be ongoing throughout the sexual activity and can be revoked at any time.

In 2010 the NUS conducted research into students’ experience of sexual harassment, assault and violence. They found that while 68% of respondents had been the victim of one or more kinds of sexual harassment on campus, only 4% of cases were reported to their institutions.

The NUS Women’s Campaign and Sexpression UK have now launched the ‘I Heart Consent’ campaign, producing national education materials for universities and colleges across the UK, initiating workshops and training programmes on campuses.

As we face concerns with issues of rape culture, victim blaming and slut shaming, having a clear understanding of consent is something that everyone should educate themselves on.

This list is by no means extensive. It aims to highlight some of the potential cases of sexual assault which can occur without consent. On the other hand, the do’s of consent are fairly simple.

•    Do understand and respect the definition of consent.
•    Do communicate and ask for consent regarding any sexual activity.
•    Do feel confident in your right to withdraw your consent at any time.

Consent is a mutual agreement between partners and must be continuous. By having a confident understanding of consent you can ensure safe and enjoyable sex for both partners. Just remember, whatever the relationship or situation, only yes means yes!