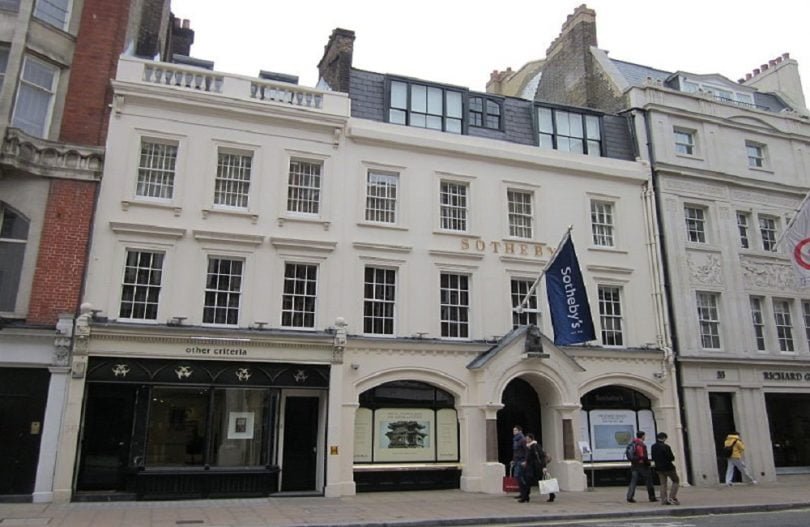 As of Fall 2015, according to Artsy.net, Sotheby’s will have a two-year partnership with the art auction website, Artsy, for £69 million.

Artsy, the new website for art auctions that sprang into action by Carter Cleveland while at Princeton University in 2012. The website is driven by the Art Genome Project, a "system that maps the connections between artists and artworks," according to a press release by Artsy. The Art Genome Project also recommends art to view.

The art auction  website with a sleek design and intuitive details gives buyers in the new age an easy to access way to buy, bid and look at art. As of recently, in addition to Sotheby's partnership last fall, Artsy has continued to start "live-integration" this past June. With new partners such as Koller and Phillips, the website has integrated where bidders can bid in their showrooms.

While started much earlier,  Sotheby’s was started in 1744 and has offices in major cities all over the world specialising in art, wine, international reality, diamonds, and art storage facilities and in art specifically, shows and auctions off many different kinds of art including more recently, art by the late David Bowie.

Artsy's Anna Carey in a phone interview said that “we now work with many, many more auction houses including Sotheby’s, but also Phillips and Heritage…and we host both online auctions which Sotheby’s last year was an online only auction. The auction is only open for a week or two, bidders can go on the site, place a bid and then the auction closes online.”

"In addition to top auction houses, we also work with top galleries, museums, and art fairs like Gagosian, the Louvre, and The Armory Show. These partnerships have helped our database to become the largest online database of contemporary art with over 500,000 images of artwork and architecture by over 50,000 artists," said Carey.

The trade is to be “groundbreaking in its firm indication of the business’s future: that of a client-first provider of art services rather than as an auction house in our traditional understanding of the term,” says Artsy.net on the matter.

But with how this will change how people view art in the future, "absolutely. Artsy is leading the way in this sort of  new model for the art world. We're providing digital tools for our partners to exceed in the digital age with potentially a new generation of art buyers…having access to art in that way is definitely is moving towards a more expanded, open accessible art world…" said Carey.

With a move towards an online world, the will to change can be attractive to newcomers and veterans of the art world alike.