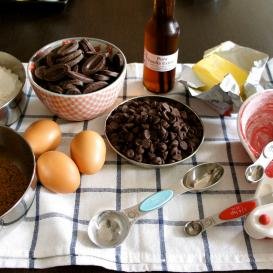 Thanks to a certain amateur baking programme, millions of people across the nation are donning their aprons and whisking up a storm.

Founder of the Clandestine Cake Club (CCC) Lynn Hill attributes her club’s success to the inclusivity of the show: “You can imagine that baking a whole cake and having to eat it yourself can be a bit daunting, so I think people like having an outlet for their baking.” With 195 groups and counting, there is no denying that people are enjoying the revival of the domestic activity, but why does baking still have a feminine stigma attached?

Baking: not a female-only territory

Baking is traditionally the legacy of the Women’s Institute: safe and heteronormative. There’s no room for that type of jam and Jerusalem stereotyping in 2015, however. Happy housewives fighting against austerity through the medium of dough have been replaced by male bakers such as Paul Hollywood and the Fabulous Baker Brothers. Fabulous indeed.

Domestic goddess Nigella Lawson- arguably the first TV chef to venture into the previously untouched realm of cakes- professed the unfair advantage that cooking has over baking:

“Baking is the less applauded of the cooking arts, whereas restaurants are a male province to be celebrated. There’s something intrinsically misogynistic about decrying a tradition because it has always been female. I’m not being entirely facetious when I say it’s a feminist tract.”

Nigella makes a valid point. Baking is constantly demoted to something that only women do. I think the thing to be taken from her statement is not that baking is only for women, but that it should be celebrated- in the same way cooking is- for both sexes. In the TV culinary world, cooking is “skilful” and “masculine”, while baking is “trivial”, “quaint” and “feminine”. These damaging stereotypes are represented by MasterChef and the Great British Bake Off, which are unfairly lauded and criticised, respectively.

Nigella Lawson’s counterpart, Jamie Oliver, burst onto the culinary scene in the 1990s and made cooking exciting. He had men concluding that they too could be a “Naked Chef” (not literally, thankfully).

While men should be encouraged to bake, women should not shun doing so just to avoid conforming to the gender role. Women should be proud of their abilities in the kitchen- and, come to think of it, everywhere else; we are simply amazing.

Male bakers are sexy and you dough it

The success of the BBC’s Great British Bake Off has shown that men can, and do, bake. In fact, in the show’s history, two of the winners have been male. Edd Kimber lifted the glass cake stand at the end of the first series in 2010, while in 2012 John Whaite was decided as the winner.

Let us not forget that 2014 contestant Nancy Birtwhistle referred to Paul Hollywood as “the male judge”. Brilliantly, the fact that he was male and a judge was more bizarre to her than his status as a male baker. Suffice to say that from that week on, she was my winner.

This year’s Great British Bake Off commenced with six male contestants of the overall twelve. By now, we are naturalised to the sight of grown men whisking, glazing and ganaching to their heart’s delight. The male/female divide seems to have been manufactured and then perpetuated by the media in a bid to evoke shock horror when someone other than a woman enters the Bake Off tent.

Men! You are kneaded, sorry- needed, to help break down gender stereotypes that belong in the 1950s. If men want to bake then there is no reason why they shouldn’t pick up the gauntlet- or, more aptly, the oven glove- and join the baking revival. Having more Paul Hollywood–type figures in the world can only be a good thing.

When you get carried away thinking you’re @PaulHollywood and then realise you’re not #GBBO pic.twitter.com/K9YsTazwmZ