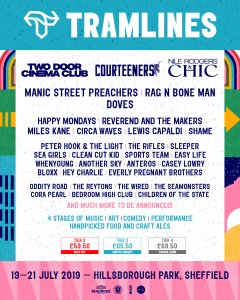 In its new home, with a capacity of 30,000 and a site spanning four stages of music, Tramlines 2019 is already shaping up to top its mammoth 10th birthday bash last year with 50% of tickets already sold out.

“Following on from the amazing party that was our tenth birthday, we’ve been working hard to make the festival even better and to find artists that we’re excited about. I think we have some great artists this year that span generations.”

The festival will also feature a comedy line up programmed by the Leadmill, a variety of street food traders and a family-friendly area full of activities and entertainment. Further announcements for all areas of the festival will be made over the coming weeks.

Tickets are now on third tier and priced from £65.50 plus booking fee for all three days. Under 12s go for free. You can find out more about Tramlines and buy tickets here.