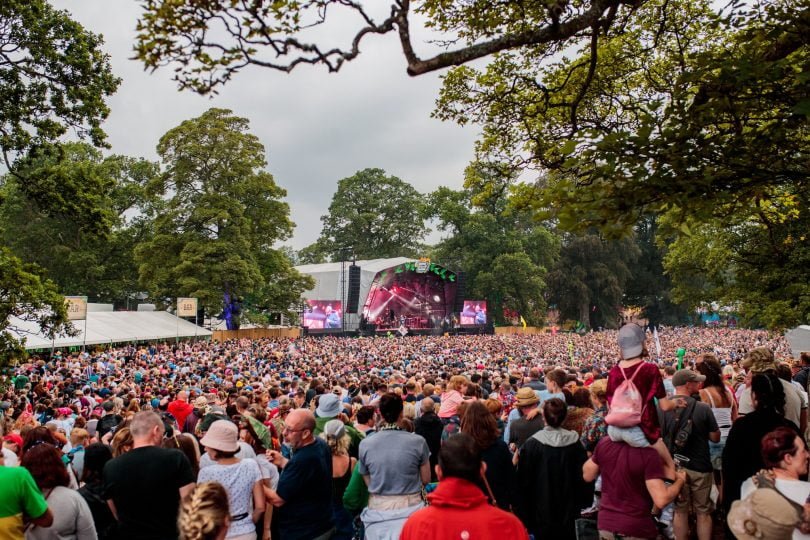 Whilst the whole country seemed to be enjoying a heat wave, Kendal Calling saw a torrential downpour. But in spite of the inclement weather, spirits seemed impenetrable by the driving rain and the atmosphere was certainly not dampened.

Kendal will next year celebrate its 15th year and although it has grown from strength to strength, it has retained those initial values that sets this particular festival apart.

Firstly the setting is stunning, the open fields of Lowther Deer Park are beset with a spectacular backdrop of rolling Cumbrian hills and mountains, but there is also splendour in the values and ethics instilled in the organisation of Kendal; which can be seen as a pioneer for more sustainable gatherings of music lovers.

If we are honest, festivals have become more commercial and are now accessed by a plethora of individuals who would not have entertained sitting in a muddy field to listen to a few bands years ago. With the rise in popularity has come the festival wanker who wants to tip up, chant football songs, burn things and when all things are said and done, head back to their lives without a thought for the tent, rubbish and impact on the environment they have left behind. This behaviour for me flies in the face of what a festival is about; it is less about the individual and more a community of like-minded people coming together into something more, the sum of the parts becoming a movement. This is the energy you feel as you watch your favourite band or the fleeting friendships formed sharing a bag of wine with the occupants of the tent next door.

Where other festivals have sold out, Kendal has maintained an air of dignity. Glass is totally banned from the festival site for the sake of the resident deer, signs in the toilets explain how the waste is composted and used as vermiculite and most importantly people are encouraged to leave their camp as they found it.

A number of artists were onboard with the sustainable drive throughout the weekend, with Beans on Toast singing fervently:

“The walk to the car is such a long one,
you have to admit it crossed your mind,
to leave all of your stuff behind,
Just stand up and walk away,
Well my friend this is not okay,
And deep down you know that you,
SHOULD TAKE YOUR SHIT HOME WTH YOU!”

Apart from the socio-political utterings of Beans on Toast, the line-up was a little weird. The headliners were not bands that I would hunt out at a club, but still of epic proportions to warrant that big tick of being able to say that you have seen the likes of crooner Sir Tom Jones or the funk stylings of Niles Rogers with Chic. The crowds were lapping up every minute of cheese and were in fine voice for ‘What’s New Pussy Cat’ and ‘Delilah’.

I can’t explain how different this festival is; alongside Bluedot they stand out as the most inclusive places to spend a weekend and the whole thing is just so pleasant, people lose all inhibitions and sing arm in arm. This is no more evident than at the crowd favourite Lancashire Hot Pots. Being from he hollowed turf of the North West myself I am a little biased, but for everyone you speak to at Kendal the immutable Hot Pots are a stalwart choice. If you haven’t heard ‘Chippy Tea’ or been conga dancing and leaning forward, backwards and side-to-side along with 25,000 other revellers you are missing out. In-fact they are on tour, go see them, now!

I was a little disappointed to have missed out on the Glow Tent for High Contrast, but we couldn’t get near the place! The queues were so long that we had to bail. This is an area that I think the Kendal organisers could explore as popular dance acts do seem to attract huge crowds.

On dance acts, the addition of Orbital to the Thursday night on the Mainstage was a stroke of genius and sums up how the whole festival incorporates acts that have been there and got the t-shirt yet are still totally smashing it out of the park. The soundsystem, light show, the whole production was right up there with some of the best acts of today.

Honorary mentions go to the Samba Stones who put on a huge Latino party in the forest and got many a person to Rumba like Jagger. Olly Alexander seems to get more exuberant every time I see Years and Years. The platforms, walkways, glitter and of course the driving disco were phenomenal. I am still amazed how Olly sings like that live, I thought it was a result of digital wizardry, truly outstanding.

Former Glastonbury headliners ‘The Manics’ were again a huge crowd pleaser and I couldn’t help but throw my arms around my friends as we all belted out the lyrics to ‘Design for Life’, ‘If You Tolerate This’ and an entire set of classic bangers. They also served as a stark reminder of the political upheaval which we face and the fact that they have been rebelling and remained relevant for thirty-two years is mind blowing.

If the music wasn’t enough, great thought had again gone into alternative ways to entertain the masses. My niece loved being able to DJ and play games in between acts in the Digital Funfair and we became fully embroiled in Red Stars immersive challenges which were played out by actors in the forest. This saw us time-travel back to the 1980’s where it would appear silent discos were the height of fashion. We were made to confess to a priest before I had a go on his fiery organ (not as filthy as it sounds). We never did manage to complete all the tasks, but had great fun nonetheless.

The highlight of the festival was of course the dinosaur parade, with a huge turn out of prehistoric patrons all getting involved to the beat of the drum ensemble. Of course inflatable T-rexes were the order of the day, but impressive puppetry and the occasional Jurassic explorer did make an appearance.

The real winners of the festival for me however again harbour a socio-political edge with songs that include their immigrant friend ‘Danny Nedelko’ the disappearance of the high street and of course the problem with the amount of Roy Keen and Charlie Sheen on the streets. A modern iteration of The Sex Pistols, The Dammed or Dead Kennedys to name a few; Idols combine heartfelt, thought provoking and evocative lyrics with hard baselines and catchy riffs. My odds-on favourite to win the Mercury Music Prize as they seem unstoppable at the moment.

There is a certain dichotomy to reflecting and writing about festivals. On one hand I feel loathed to be back in the real-world and yet I think a couple of weeks, let alone a month at that pace of life would end me. I know that the things we achieved, the memories and closeness we felt to one another remains entrenched in the mud that we left behind. Yet these encounters do leave an impression on us, they teach us to be resilient of the mud, tolerant of one another’s views and choices and to enjoy life in a way that we rarely do in mainstream society.

Having worked at festivals, I have seen the carnage, aftermath and lack of social responsibility that comes with 25,000 people enjoying themselves and although I have had a little rant, a take home message from Kendal, the artists and myself is to be a little more conscientious. Give thought to our environment and those people tasked with tidying up after you, whether that be at a festival or in your daily lives and most importantly…take your shit with you!

Tickets and deposit schemes are already available for next year. For those looking to escape the norm and take time out to enjoy your festival at a reasonable price, I will see you in the fields!