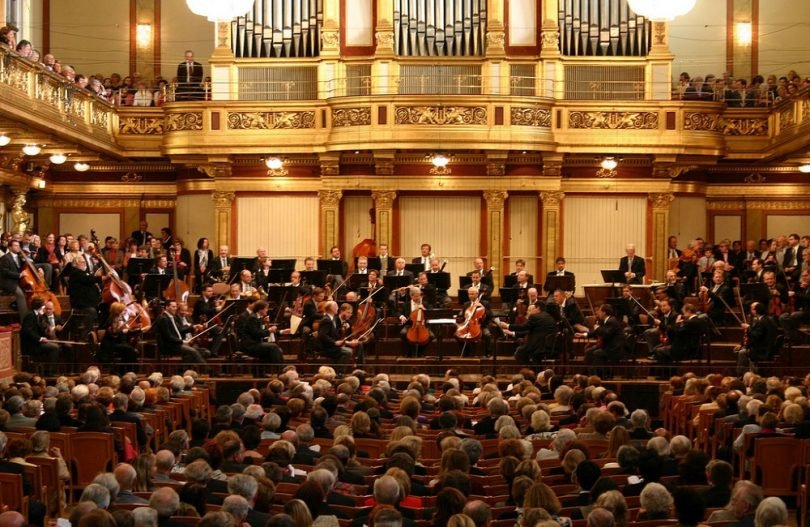 It is considered to be one of the most extravagant concerts of the year, a concert that sees tickets drawn by lot, with competition for seats as vivacious as tickets for Radio 1’s Big Weekend or a gig at Wembley Stadium. This extravagance is at the crux of a tradition heard and seen around the world when the sounds of the Strauss family come alive at Vienna’s aesthetically pleasing Musikverein.

It is the annual New Year’s Day concert of the Vienna Philharmonic, and in a two-part span showcases the sounds of a family associated with the waltz, a piece in three-quarter time that sounds simple, yet delicate on the surface.

It always is a special occasion for the Philharmonic in spite of the difficult relations at times with the Strauss family. The orchestra had raised some objections but began to take it seriously in the 1920s.

Yet on this particular occasion it is more so. This concert begins the 175th anniversary season of the Philharmonic, and they also had their youngest conductor to lead the orchestra – Gustavo Dudamel, the 35 year old charismatic musician and conductor from Venezuela, who serves as the music director for the Simon Bolivar Symphony Orchestra and the Los Angeles Philharmonic.

There are the showcases of the music of the Strauss family, waltzes and polkas, yet when the programme begins, the Philharmonic showcases works beyond waltzes, for eight pieces received their debut at this concert, something that was part of the planning of this performance.

In an interview with Radio 3’s Petroc Trelawny (who provides unique commentary on the performance), Andreas Grossbauer, chairman of the Philharmonic and a first violinist with the ensemble, said because it was the 175th anniversary season, the ability to look forward was presented. Grossbauer selected pieces that were reflective of Dudamel’s character.

The work of Grossbauer and his colleagues paid off, including pieces indicative of Viennese musical culture from composers integral to the history of the city’s musical legacy, including Franz von Suppé, and the founder of the Philharmonic, Otto Nicolai.

Nevertheless, tradition reigns supreme at such an extravagant concert as this. There are three encores that complement the selection of waltzes and polkas from the Strauss family, including the piece that gave Johann Strauss II international fame as the Waltz King – his signature piece 'The Blue Danube', which was composed 150 years ago, named for the river that flows partially through Vienna.

Yet, what sealed the performance was the final encore, the 'Radetzky March' from Johann Strauss I, a performance that showed Dudamel’s vivacity as a conductor, and his own sheer personal excitement, conducting the audience to clap along as the march went on. That piece had been part of boosting morale, an idea stemming from the Second World War. Its tradition of boosting morale continued, and it was the perfect end to a concert that was a delightful listen.

Though the Philharmonic has some things to tackle, notably the expansion of the number of women playing in the ensemble, they did showcase, as they do every 1st of January, why they are one of the best orchestras in the world, and that this concert is and always will be, a quintessential part of the New Year celebrations.

The Vienna Philharmonic’s New Year’s Day concert is available to listen to online through the Radio 3 web site and to watch via iPlayer.