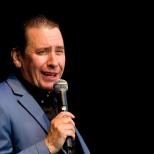 You know you haven’t celebrated the New Year properly when you miss Jools Holland’s Annual Hootenanny. I caught up with the show and relived the best music of 2015, and saw the future of music into the New Year.

You have to love Holland’s spirit and charisma for music as he certainly loves to put on a show. Starting off he and his Blues Orchestra (who accompany many of the artists) opened the show with a little ditty to get everyone in the party mood.

This show definitely awakened my knowledge of music, just when I thought I knew everything about the industry I was proved wrong. The next performance was brought to us by Ruby Tuner (R&B Jamaican soul singer) singing ‘Pray Have Mercy’. Guilty as charged, I had never heard of her but she certainly put on a performance and I will definitely be googling her soon.

Next was a true favourite of mine, the five-time number one artist Jess Glynne, who sang my favourite song – ‘Hold My Hand’. You’d think that singing that song on so many live shows she would be sick of it, but no, Jess Glynne strutted her stuff as usual and got me up from my sofa and dancing in the living room.

I have been known to slate this so called music legend, but Sir Tom Jones defiantly lived up to his title as he performed some of his well-known tracks for Jools’ Annual Hootenanny. I’m not usually an avid fan of Mr Jones, but he certainly floated my boat that New Year’s night.

Now, I am all for experiencing new music, but when it comes to different this really took the biscuit. A band called Future Islands – don’t worry I’ve never heard of them either – and I’m not sure what to make of them if I’m perfectly honest, and I don’t think the band did either. The sound, or should I say noise, that they were making was radical. You could tell that they did their own choreography and created their own music – or whatever it was…

This lad on Jools Holland has been on the magic powder I reckon! These moves are right out of Eddie Reed’s locker! pic.twitter.com/ecNahEGqb4

Holland was all about getting the New Year celebratory atmosphere going, talking to a variety of celebs from the world of entertainment to playing alongside a range of artists with his blues orchestra.

You know you’ve had a good night when you get to hang out with Sam Herring. @futureislands #Hootenanny #joolsholland pic.twitter.com/RoPywu5hUy

If I remember correctly from my BBC Music Awards article, Hozier won Song of the Year and we were lucky enough to watch him perform for Jools’s New Year’s show. Yet again his voice never ceases to amaze me.

From witnessing the future of music to a blast from the past as we saw KT Tunstall (I know, where has she been) bring out her inner rock chick and sing a few songs before the countdown began.

And as it did, the confetti came out and so did the bagpipes as the BBC brought us into the New Year; the hootenanny was quite a hoot.

Did you watch Jools’ Annual Hootenanny this year? Let us know in the comments below!