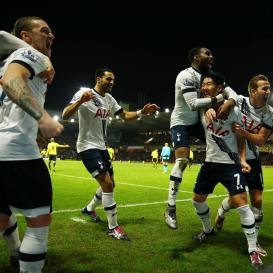 A finish in the top 4 of the Barclays Premier League is the coveted consolation prize for those teams unable to lift the trophy at the end of the season. In the last few seasons these places have been ever changing, with only Arsenal and Manchester City as constant members. At the half way point in this season Tottenham have forced themselves into 4th place and have a 3 point lead over trophy veterans Manchester United; who sit directly below them.

For years Tottenham have been on the verge of breaking into the Champions League places and it looks as if this season they could finally make it. Harry Kane looks to rekindle the form he surprised the world with last season, currently holding 11 goals in 20 matches, and players such as Dele Alli at the tender age of 19 are making an impact, the latter also scoring against a strong French national side. Alli proved this ability again this weekend, scoring the equaliser against Everton to earn a much needed point for Tottenham, in a game where Kane and Davies both hit the post in what easily could have been a 3-1 win for the Spurs.

It is important to note what has gone so right for Tottenham Hotspur in recent seasons, and many would have expected this kind of form after the investment in the team, following the sale of world record signing Gareth Bale to Real Madrid. However, it has not all been positive. Former Spurs manager Andre Villa Boas signed promising youngster Erik Lamela, who did not have quite the impact as hoped, but he was not as much of a disappointment as Roberto Soldado. Soldado, who signed from Valencia, scored 7 goals in 52 appearances for Tottenham, which is incredibly poor, and was sold to Villarreal in 2015. More failures were Paulinho, Capoue and Chiriches. Although players such as Christian Eriksen and Nacer Chadli have improved the side, it was only after the sacking of Tim Sherwood and the poaching of Mauricio Pochettino in 2014 that Tottenham turned a corner.

Tim Sherwood was the first to promote the talents of Harry Kane among others, but it was clear that Chairman Daniel Levy was impressed with former Espanyol manager Pochettino and his south coast exploits. In his first full season, Kane was given a chance, and scored an incredible 35 goals in 68 games in all competitions. Although off to a slow start this season, Kane seems to be rekindling this form, with 11 goals in 20.

Pochettino was also able to persuade star goalkeeper Hugo Lloris to stay at White Hart Lane which is paramount to Tottenham’s success, while also sneaking versatile defender Toby Alderweireld out from under Southampton’s noses. Tottenham also appear to have a very good mix of experience and young talent, with an experienced goal keeper and seasoned Spurs’ defenders Kyle Walker and Jan Vertonghen. With the addition of Alderweireld and Ben Davies, their defence looks solid each game. With young Englishmen Eric Dier and Tom Carroll in the centre of midfield followed by Eriksen, Alli, Lamela and finally lone striker Kane, Pochettino and his side managed to silence a dangerous Lukaku in the aforementioned draw to Everton.

Another secret to the success of Tottenham so far this season is Pochettino’s tactical ability and willingness to make changes. Pochettino in his first season as Spurs used a 4-2-3-1 formation which was solid and very clear for each player. Yet many times this season he has deployed a 4-3-3 formation which clearly has proved successful for Spurs, by the New Year reaching their target of 4th place. However Pochettino’s tactical ability is shown when facing a team like Watford, recently promoted from the Championship and flying high in 9th position.

Watford boast successful attacking duo Troy Deeney and Odion Ighalo, who hold 20 goals between them, 14 by Ighalo alone. Pochettino recognised the threat posed and switched back to his 4-2-3-1 formation, which gives the defence slightly more cover in order to help defend against the two main threats of Watford, while still pushing Kane forward with support from three advanced midfielders.

To pull all of this together, I believe that Tottenham should be pushing forward to higher than 4th place in the Premier League. Clearly every player can be subject to changes in form and injuries, but with Jamie Vardy sidelined at Leicester for 2 weeks and a potential slowing of the unstoppable train that very team has become, Tottenham could capitalise on this. Moreover, their depth and good balance between youth and experience within the side will aid them. Lastly, Tottenham may have been dealt a favourable set of cards this season, with the demise of Chelsea and Jose Mourinho’s career in London, along with Klopp’s slow start to Liverpool. If Leicester do fall from where they quickly rose to, then a Champions League place could quite easily await Tottenham in August.