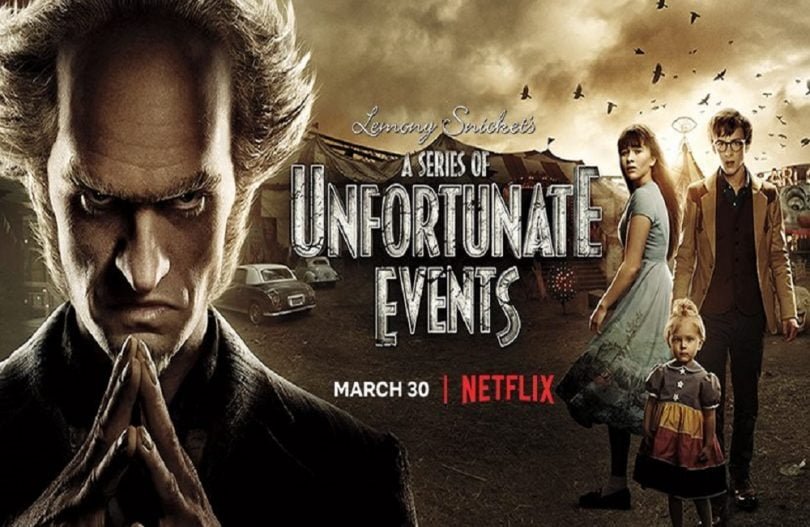 “It is the Baudelaires’ destiny to arrive here, but you could be someplace else. And within moments, you’ll almost certainly wish that you were,” we’re warned.

As promised, the new series of A Series of Unfortunate Events sees the Baudelaire siblings encounter countless more hardships as a result of Count Olaf’s increasingly outrageous schemes and, as expected, we see more of its lovable caricatures, on the nose references, and cinematically beautiful scenes.

One of the main appeals of the series for me lies in the return of Patrick Warburton’s sombre portrayal of Lemony Snicket, as I find myself hanging onto every word of his monotonal performance. It’s been a while since I read the original books but it’s the faithful preservation of Snicket’s distinctive style that reminds me most of reading the outrageously constructed narrative as a child.

The beautiful scenes fit the quirky narration wonderfully and, despite the little bits of heartbreak within each episode there’s always a gorgeous shot showing a moment of relief for the siblings. One shot of Violet, Klaus and Sunny holding each other in the moonlight stayed with me for a while after I stopped watching.

Images like the Baudelaires ‘barking up the wrong tree’ or the minutes spent delving into the difference between ‘nervous’ and ‘anxious’ brought back the same excitement I had for the books when I was a child.

While the show’s foreshadowing and constant warnings to ‘look away’ become slightly grating at times, they’re balanced by the clever humour, largely resulting from its self-awareness. They also do the job of keeping us in enough suspense to carry on the tempting Netflix binge.

The cast, new and old, are spectacular. Lucy Punch was an incredible addition to the cast. As she once said in an interview with The Guardian, ‘if the character is smug, bitchy, trashy or has dubious morals, call me!’, and her portrayal of Esmé Squalor is no different. She brings a flash of colour to Count Olaf’s slightly worse for wear troupe and, always staying true to her obsession with style and her quest to find her sugar bowl, she becomes a weirdly loveable staple of the show.

The return of Neil Patrick Harris is similarly wonderful. He doesn’t simply bring the revolting, terrifying and hilarious Count Olaf to life, but his range of bizarre disguises, allowing a full personality to emerge out of each one. My favourite had to be the jazz obsessed Detective Dupin.

The star character for me, though, has to be Sunny Baudelaire. Despite being the smallest character, she has one of the biggest personalities. Her nonchalant intelligence and dexterity make her one of the funniest parts of the show. From her skills as an administrative assistant to her climbing abilities and her cutting one-liners, she definitely earned the most laughs from me.

As a whole, the new series was a beautiful and suspense-filled continuation, which left me with gorgeous imagery to accompany some of my favourite childhood books, a renewed love for Neil Patrick Harris, and a deep envy for the Baudelaire siblings’ wardrobe.

Does anyone else feel suddenly in need of a pinstripe suit?