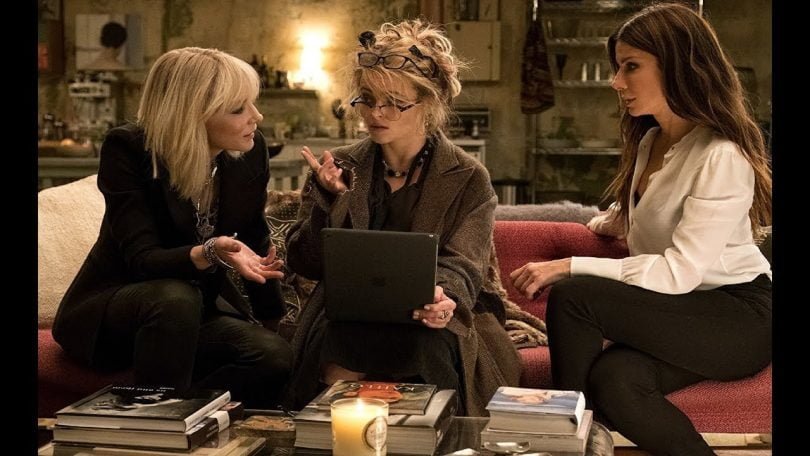 With the premier of the an all star female cast, Ocean’s 8 is bringing excitement to the big screens.  Sandra Bullock, Helena Bonham-Carter, and Rihanna claim to celebrate diversity and feminism in the new remake of the Ocean’s film.  However, I can’t help but compare the familiar cast formula to 2016’s Ghostbusters. There is also talk of a female led remake of cult film, lord of the flies. To see an all star female cast, with hype, it seems that Hollywood thinks only remakes of originally male led films can make that happen. But is that a real triumph for women in the film industry?

Ghostbusters received a lot of mixed reviews, some claiming they were ruining a classic and others comparing it to the original. It sure didn’t have an impact like the 1980’s original did. Remakes with gender reversed casts are highlighting one thing. Rivalry. Who can do it better? Ocean’s 8 looks like it’s trying to prove women can perform a heist just as streamline as Danny Ocean with that final impact that George Clooney or Frank Sinatra had. Can Bullock do it justice? This is something I’m looking forward to finding out once I catch it in cinema.

I understand why Hollywood are doing it. Using an already well known title, putting women at the front plays into this current wave of feminism and tying it with pop culture as well using a star studded cast. Got to be a hit right? Directed by Gary Ross, Ocean’s 8 appears to follow a similar narrative to its brothers. And that’s what Hollywood is pinning their hopes on.

While I’m looking forward to watching a kick ass team pull off the “biggest heist the world has ever seen,” I can’t help but wonder… is it enough? Sure, Hollywood has finally realised that women can lead a film and it can still be a success; look at Hunger Games and Wonder Woman for example, yet they decide to bring out remakes and sequels. Hollywood is missing out on opportunities for original writing from women to create a platform for new female actors.

Greta Gerwig’s, Lady Bird,  has been a perfect example of what Hollywood is missing out on. This independent film was a stage to strong women in the film industry and while it focused on mother/daughter relationships and Lady Bird’s emotions, it held a narrative that could be relatable to any member of a family and any teenager. Not saying that Ocean’s 8 wont be relatable. It does appear to have a diverse set of bodies and personalities while having an exciting plot. But could they have done that with less known actors?

In an interview with Graham Norton (BBC1), Bullock replied to Norton’s, ”something you don’t see all the time”,  “What? Women in film?” The crowd laughed and applauded and while it highlighted the issues of women in film, Ocean’s 8 still prove to have a cast of women who have a strong film and tv history. They are the women we continue to see. Helena Bonham Carter, Rihanna and Cate Blanchett are names everyone already knows. Meanwhile there are women who continue to struggle to get into the film industry and maybe Hollywood should giving the less privileged, less known story lines, a chance. Just a thought. Although, there is of course the issue of money. Sequels and remakes with known casts are expected to do well in box office. With loyal fans of the films and stars, the films will take in enough to be a success for the cinema weeks.

Ocean’s 8 may prove to be a hit that Hollywood hopes. A cash flow is needed, a profit is expected and the staff are expected to be inclusive and diverse. It is a business like any other. So maybe this show business needs to take more risks for feminism. Maybe that is the next step. To open more doors to the women we don’t regularly see on the screen and allow a stage for more original stories to be told. Sandra Bullock will always be a favourite actor of mine but that does not mean I don’t have room for more.

Highly caffeinated writer, feminist and film lover. After starting a lifestyle blog, littlekaatie.com in 2013, Katie flourished in writing for theatre magazine, A younger theatre and numerous other publications. Her interests lie in films, feminism, mental health and student life.