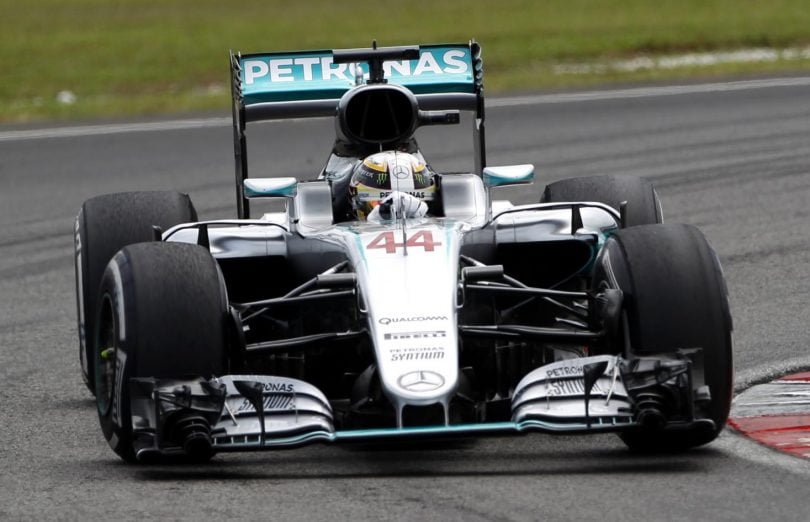 Mercedes picked up their first ever front row lockout in Malaysia, as the two Red Bull’s once again followed closely behind in 3rd and 4th.

Daniel Ricciardo failed to out-qualify teammate Max Verstappen for only the third time, in a session which saw Verstappen drive extremely well, and puts himself in great position for Sunday’s race, coming off the back of a dominant weekend.

Hamilton reflected on his emphatic lap as it “could have been faster” as he looks to bounce back on his third-place finish in Singapore, two weeks ago. It is also 4 poles in 5 years for Hamilton in Sepang, which will be good reading for Hamilton fans going into tomorrow’s race.

Fastest lap by anyone at Sepang since 2005 ⏱

There was also an impressive drive from Mclaren’s Jenson Button. An unexpected 9th position qualification for the Brit on his 300th race weekend stands him in good stead for a points finish.

Fernando Alonso already knew he was to start at the back of the grid, as he took an engine penalty following a new turbo charger and a new unit for his car. Alonso officially qualified down in 22nd, but has a lot of work to do if he is to rival teammate Jenson Button in Malaysia on Sunday.

It wasn’t good news for Ferrari, as once again the Red arrows qualifying pace failed to match that of the Red Bulls. There were big changes to the Red Bull car following the practice sessions, however, they seemed to pay off, with Verstappen particularly looking good with his long run pace.

VES: "The whole weekend has been quite positive. Long run pace looks promising and I'm really pleased to be P3" #MalaysiaGP pic.twitter.com/dsSgzQ6gpO

Elsewhere in the top 10, Sebastian Perez achieved a best ever qualifying finish, as he will start in 7th position, beating his 2012/2013 9th place start.

Valtteri Bottas failed to continue his impressive qualifying form by just missing out on Q1, qualifying in 11th. Bottas was unable to outpace his midfield competitors, in a particularly quick Q2.

After qualifying Bottas was one of many complaining about the decreased track temperature affecting the way the cars performed in comparison to the conditions in practice.

The Track temperature decreased around 12 degrees from practice, contributing to several spins and lock-up’s.

Manor;s new recruit Esteban Ocon out qualified teammate Pascal Wehrlein for first time, however, it wasn’t enough to see him break out of Q1.

There was also more disappointment for Jolyon Palmer who narrowly missed out on Q2, despite having a promising weekend in his 3 practice sessions.