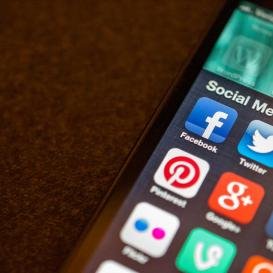 Everyone is probably familiar with the phrase F.O.M.O (aka Fear Of Missing Out) but there is a new kind of fear brewing within most of us, F.O.L.O (the dreaded Fear Of Life Offline).

F.O.L.O refers to that gut-wrenching feeling when you see that Chantelle has snapchatted a story of her night down at Trebles with “her gals” whilst you sit at home watching Corrie. Your company, however, is a portion of Ben with a side of Jerry.

The dreaded F.O.L.O takes over, the question of, are you boring?? Chantelle’s story features various lethal combinations of triple vodka and red bull and yours is a photo of your snacks taken at the perfect angle.

I’m not sure what was better, the molten chocolate lava cake or Julia tripping over absolutely nothing ? #NightOut pic.twitter.com/77SmkmFY4T

But then you ask yourself, does this REALLY matter? Yes, Chantelle’s life looks fun in that 80 second ‘story’ that she posted, but who’s REALLY having the better time? *smiles lovingly at ice cream*

At this age there’s pressure to appear like you have your life together and keep as busy as possible. Then there is the pressure to document your amazing life on Snapchat, Instagram, Twitter etc. You see other people’s posts and think their life looks better, you post more, and the cycle of anxiety goes on and on.

Chantelle might look like she’s having the best time as she adds the Valencia filter to her Sex on the Beach, but who really cares?

Sex on the Beach? pic.twitter.com/nx2KuT8kOZ

Looking back and leaving the Christmas period behind, January is the season of bragging. F.O.L.O takes on a whole new level when the New Year brings not only “new year, new me” but the annual flurry of “ooh check out what I got for Christmas.”

To go all cringe on you, what someone posts online is not always an accurate representation, and to compare your life to someone else’s at all (let alone just based on what they post) is dangerous, and personally for me often leaves me feeling boring and inadequate.

The new rise of the mega vloggers and bloggers has become more than apparent over the last few months, and makes it even easier to take a glimpse into someone else’s life. What makes it worse is that these videos are only really a tiny part of that person’s life. With videos like these cropping up EVERYWHERE and even targeting younger viewers, it’s hard to avoid the feeling that someone’s life is just that little bit better than yours. This can particularly become a problem with younger viewers who buy into this fake reality (literally… I’m talking branded products here) and may even develop insecurities.

It’s taken me pretty much all week to tidy my office space as it has turned into a Zoella Beauty warehouse, PO box & Christmas stuff zone ?

I’ve learnt recently that there’s no point sitting and thinking about what other people are doing and what you think you should be doing, because at the end of the day it really doesn’t matter. If you’re happy with the way things are going in your life, do not for one second put yourself down because of the impression that someone else gives online.

If you’re happy with what you’ve got going on then that’s all that matters. Fair enough, follow your mates on Instagram, and maybe Caroline Flack (because, THAT HAIR) and whoever else you want, but remember not everything is as it seems.

Comparing yourself to others is pointless and damaging, and Chantelle probably had a shit time anyway.