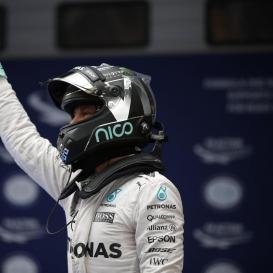 Nico Robserg will start tomorrow’s Chinese Grand Prix from pole position whilst teammate Lewis Hamilton starts from last place after an engine problem meant he could not set a time.

Hamilton went into qualifying already on the back foot after he was hit with a five-place grid penalty after his gearbox was changed. His misery was soon compounded after an ERS problem prevented the reigning champion from making it passed Q1.

As things stand he’ll start from the back of the grid #ChineseGP pic.twitter.com/NiDiCygpyJ

Daniel Ricciardo joins Rosberg on the front row of the grid after an encouraging performance in Q3 ahead of Kimi Raikkonen in 3rd place and Sebastian Vettel in 4th.

Q1 started with the track dry in most places with a wet line on the pit straight which almost caught out a number of drivers. Pascal Wehrlein was not so lucky. The Manor opened his DRS when going across the bump and wet line which went to car into a spin and brushed the armco on the main straight bringing out a red flag.

There was a late scramble to set a time in Q1 and it was Ferrari fair that seemed to have the upper hand over Nico Rosberg. With Lewis Hamilton already out of the session there was a chance for a surprise Q2 entrant.

Marcus Ericsson sealed his place in Q2 in the dying moments of the season with an impressive lap time. Whilst the Sauber booked a place into Q2, Rio Haryanto, Jolyon Palmer, Esteban Gutierrez and Kevin Magnussen joined both Hamilton and Wehrlein on the sidelines.

The biggest story of Q2 was Nico Rosberg who set his time on the medium compound tyre. Rosberg will start the race on the yellow marked tyre whilst Ferrari will be starting on the super-soft compound which is estimated to last in race conditions roughly six laps at the start.

Red Bull showed glimpses of their strong pace in Q2 which they carried over into the top-ten shootout.

There was another red flag in Q2 after Nico Hulkenberg lost his front right tyre. The German’s tyre fell off on-track which has resulted in a three-place grid penalty.

The red flag was signaled with just 1:17 left on the clock and brought Q2 to an early end. A number of drivers lost out on a second run in the session because of the flag much to the frustration of McLarens Jenson Button and Fernando Alonso who were looking to get their McLaren into Q3 for the first time since the return to Honda power in 2015.

RED FLAG: With 1:17 left in Q2, the session is halted after Hulkenberg loses one of his front wheels #ChineseGP pic.twitter.com/ANUydkEmhU

After the first runs in Q3 it looked as if there was a strong chance that Kimi Raikkonen could clinch his first pole position since France in 2008.

The Finn’s first lap was good enough for provisional pole whose time was .139s faster than Rosberg’s first effort. Daniel Ricciardo was close behind in 3rd place.

Sebastian Vettel opted for just a single lap in Q3. A strategy that he adopted in China in 2009 and to great affect which saw him take pole position that day. The German was unable to repeat those heroics today and will start 4th after Vettel made a slight error on his single run.

VET: “We saved some tyres for tomorrow. Nico starts on a different compound so it will be interesting” #ChineseGP ?? pic.twitter.com/jOYcENiV55

Nico Rosberg turned on the style by going over half a second faster than 2nd placed man Daniel Ricciardo.

VIDEO ? Go onboard for the lap that secured @nico_rosberg the 23rd pole of his career >> https://t.co/Px3Hl9k4uc pic.twitter.com/0lnDAH4YbU

Will it a stroll in the park for Rosberg? Can Ferrari take their first win of the season? Or will Lewis Hamilton make his way through the pack and get to the podium? Leave your comments below.