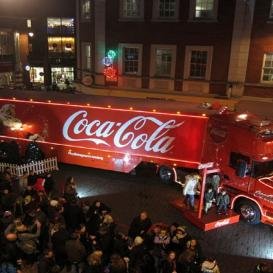 For many, the unmistakable Coca-Cola Christmas truck symbolises that the holidays really are here and we all know that when the advert pops up on the telly, it’s basically Christmas Day.

So when the famous truck came to the city of Lincoln for the day on 10th December, thousands of people took a visit to St Marks shopping centre to see the truck and, of course, take a few selfies. The iconic truck arrived at 12pm and departed again at 8pm, leaving plenty of time for people to visit and truly get into the Christmas spirit.

There was the opportunity to queue for an official photograph with the truck, as well as having free Coca Cola thrust into your hands (no complaints there of course!). There were a number of stalls selling merchandise, candyfloss and popcorn, as well as an impressive laser tag quest which involved getting into a giant inflatable tunnel for 5 minutes and trying to shoot your opponent.

Of course, something as huge as this doesn’t come without its drawbacks. The city centre of Lincoln was like a cattle market.

You could barely move for all the people and we were even told by security guards that there had been reports of pick-pocketers at the event, meaning that you couldn’t fully enjoy the experience without constantly being on edge everytime you felt someone brush past you.

I also heard on the local radio station that commuters on their way home from work were facing their return journey being double the usual time, which of course, is the last thing you want after a long day at work.

However, despite all this, I really enjoyed going to see the truck; it’s definitely something to tell the grandkids one day and it contributed to putting Lincoln a bit more on the map (though I don’t know why we need to, Lincolnshire is the second biggest county in the UK and people still look at me gone out when I say it’s where I’m from).

After going to the Christmas Market last week and now seeing the truck, I can definitely say that I’m in the Christmas spirit! After all, it’s Coca-Cola that made Christmas red.. Santa wore green before the franchise started their promotional tactics!

All I need to do now is wrap up my Christmas presents, buy a tree and decorate the house.. eek, Christmas is coming!!