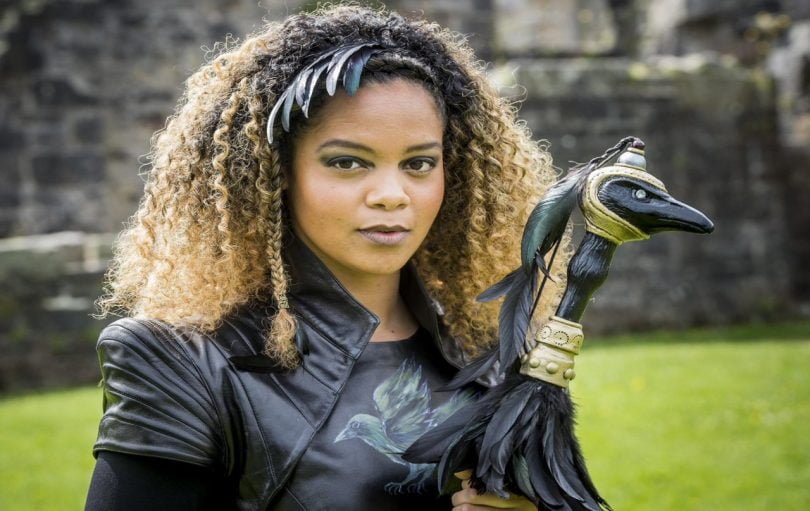 Arguably one the best children’s TV programme of the Noughties, Raven was an exhilarating rollercoaster from start to finish. The adventure game show tested the agility and nerve of groups of six schoolchildren in a series of challenges over three weeks. These ‘warriors’ were the envy of youngsters up and down the country.

What we wouldn’t have given to compete to win feathers in idyllic Scotland.

The show ran from 2002 until 2010 on the trusty beacon of childhood TV, CBBC. Now, after seven years away, Raven is returning to our screens.

Raven saw youngsters endure a series of challenges in each episode. Finishing with the least number of lives meant only one thing: you must face the Way of the Warrior. Each week, two warriors would go through to compete in the final week of the quest, where one would be crowned the Ultimate Warrior.

It is normal – as a fully-fledged twenty-something – to still be jealous of the wannabe warriors, right?

Newcomer Aisha Toussaint, 21, will be taking the helm as the eponymous shape-shifting figure, while fan favourite James McKenzie has promised that he will be returning in an as-yet surprise role.

Really chuffed for @AishaAToussaint she'll be fab! Looking forward to working with her When the old bird makes an appearance! pic.twitter.com/NcvQaedCnB

As reported in the Radio Times, young actor Toussaint has told of her excitement to be part of such a thrilling show: “I'm absolutely thrilled to be the new Raven. I was a massive fan of the original series and remember rushing home from school so I didn't miss an episode – it was always so exciting”

“I used to dream of one day being a warrior contestant – I never for a second imagined that I'd one day be Raven. My 11-year-old self would be gobsmacked!"

After more than 2000 people applied for the 16 places available, filming has been confirmed to start in the Cairngorms National Park in July. The 9-13 year-old hopeful warriors will feature on the new series on CBBC later in the year.

The show is sure to bring with it tons of nostalgia, as it evokes memories of racing home from school and taking command of the television for the unmissable challenges.

Twitter has been buzzing with users sharing the news, and their own memories of watching the original run religiously:

When you find out that CBBC is Reviving your favourite Childhood Game Show Raven is coming Backkk boii @cbbc #Raven pic.twitter.com/BMIVqQsXo7

“The return of Raven has caused great excitement and we wait with anticipation to meet the new cast and immerse ourselves in this legendary battle.”

Indeed, it was the perfect TV show – packed with mythical characters, electrifying challenges, and just the right amount of implied danger. To a young viewers eyes, the seemingly impending doom the failed warriors would face was a weekly highlight. The terrifying Nevar, Raven's arch nemesis, will also be making a comeback in the revamped series as the search for the Ultimate Warrior resumes after more than half a decade.

One fan even has an ingenious idea for a Raven spin-off:

Do you remember Raven? Which other TV shows would you like to see back on our screens? Join us on Twitter @KettleMag