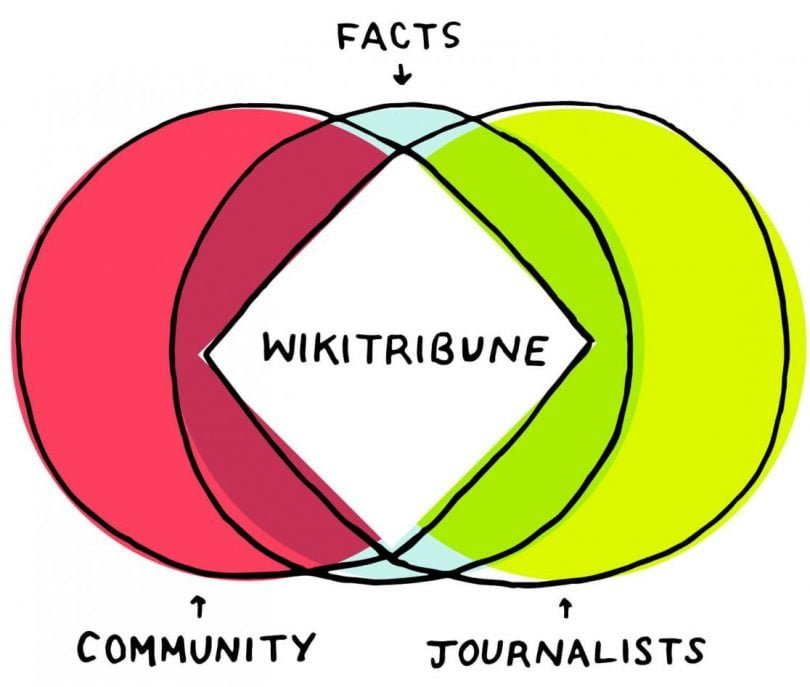 The recent announcement that Wikipedia founder Jimmy Wales was launching a site to combat fake news divided opinion among journalists.

Although not affiliated with the Wikimedia Foundation, WikiTribune adopts a similar approach to the online encyclopedia Wikipedia, meaning that community members will be responsible for producing most of the site’s content. There will, however, be further layers of protection and precaution in place.

In a Today programme interview and campaign video ahead of the site’s launch, Wales said that WikiTribune would employ a team of ten “professional journalists” to report on stories, which will then be edited and fact checked by the wider community of volunteers. Articles will aim to be transparent “to the maximum extent possible” about the source of news by posting full transcripts and recordings of interviews.

If community members wish to see more focus on a particular area and are willing to pay the additional money in monthly subscriptions a specialist in that area will be hired. The site will also focus on investigative reporting and journalism.

A step too far?

This community centric approach, including Wales’ plans to have “professional journalists and community members working side by side as equals”, have been criticised by a number of media commentators.

US Publication The Atlantic highlighted that considering qualified journalists and “hobbyists” as equals was, in its view, “harmful to professional journalism” and the resources and time that many of those employed by the industry devote to completing a job. It also criticised the vagueness of the broad aim of Wales’ small team of journalists to cover “global news stories”.

The motive for launching WikiTribune, in addition to combatting ‘fake news’, is to provide news “by the people and for the people”. A number of other media outlets have used such crowdsourcing before, perhaps most notably by The Guardian in its investigation of MPs expenses, but the majority of these sitances have only been to evaluate data on one story or for a short period of time and those with the final say on content have always been professional editors and journalists.

Crowdsourcing without editorial oversight can also have disastrous consequences, such as when a group of Reddit users falsely accused a missing US student of being the Boston Marathon Bomber.

Perhaps Wales’ larger concern surrounding the news is the way in which it is distributed rather than the content itself. His statements on the WikiTribune website that citizen journalism has “hit a wall” and that the “news is broken” suggest ambitions far wider than simply combatting misinformation.

From his critiques of the current advertising based business model of many news organisations to concerns over the influence that owners and publishers can exert on the content of their media outlets and his assertion that professional journalists are no longer the “gatekeepers” of the content they publish, Wales’ ambitions seem to be more orientated towards reshaping the entire industry.

His statements on the WikiTribune website that citizen journalism has “hit a wall” and that the “news is broken” suggest ambitions far wider than simply combatting misinformation.

Academics have also reacted with concern, with City University International Journalism lecturer Zahera Harb warning that giving volunteers the ability to edit and modify articles in a similar manner to Wikipedia “will make the end product closer to plagiarism than real journalism”, with the difference that the original authors of articles will likely have to indirectly give consent for this to happen.

Although WikiTribune could genuinely represent a new manner of combating deceptive content within journalism, many seem to remain unconvinced.