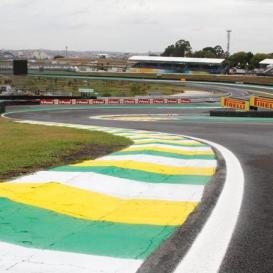 For the penultimate race of the 2015 Formula 1 season the sport took to Brazil. With the championship already sealed by Mercedes’ Lewis Hamilton there was less to play for, though Hamilton was clearly keen to secure his first win at the track, the home of his idol Ayrton Senna.

But throughout qualifying Hamilton’s team-mate Nico Rosberg was desperate to prove his own worth and retain a second place finish in the championship standings, taking pole position with an incredibly close 0.078s to Hamilton, having won in Brazil in 2014.

Qualifying for the McLaren’s was another abysmal affair with Fernando Alonso unable to set a time as he pulled over on his quick lap. Waiting on the side-lines the Spaniard decided that it was ample time to enjoy the sun and catch some rays.

He then joined team-mate Jenson Button, who was knocked out in Q1, on the Brazilian podium for some fun antics, the closest the team have got to any podium so far this season.

Enjoying our moment on the podium… We will be back up here soon for real! #staypositive #BelieveinMclarenHonda #JB22 #FA14

An engine change didn’t pay off for Daniel Ricciardo who qualified in ninth with his Red Bull, a 10 place grid penalty being added which left the Australian down in 19th.

Into the formation lap Toro Rosso’s Carlos Sainz was plagued with problems, being towed back to the pit lane and forced to start the race from there. On the opening lap he pulled onto the grass and straight into retirement.

Well, that was unfortunate for Carlos. After having to start from pit-lane, car has stopped and he’s out of race pic.twitter.com/quSMqSIxvG

Onto the race start and Rosberg got off the line quickly, keeping the lead over Hamilton. Valtteri Bottas moved up two places in his Williams, after suffering from a penalty that left him starting down in seventh.

As the race continued there was plenty of toing and froing with the first set of stops completed around the 15 lap mark. Rosberg was the first of the Mercedes cars in with a slow time of 4.4s, not what you would usually expect from the championship winning team, though the German was slightly held up waiting for Ferrari’s Sebastian Vettel to drive past.

There was a chance for Hamilton to gain on Rosberg with a good stop but his was also slower than usual at 3.6s and so he returned onto the track in second place.

There were more battles further behind, Pastor Maldonado’s Lotus losing out to the Force India of Nico Hulkenberg and Williams’ Felipe Massa, Daniil Kvyat’s Red Bull also in the mix.

The McLaren’s were powerless throughout the race, Alonso on his 12th engine of the season, the allowance of which is only four. The problems for the team have really been across the board.

At the halfway mark of the Grand Prix Toro Rosso’s Max Verstappen proved himself a future world champion as he took a brave move on Force India’s Sergio Perez. Romain Grosjean took full advantage in his Lotus, following Verstappen through and leaving Perez down two places.

For his first season in Formula 1 it really was an exceptional move from Verstappen. Only a few laps later and Maldonado attempted a similar move on Sauber’s Marcus Ericsson but this time around it resulted in contact and a 5 second time penalty for the Venezuelan.

On the whole there was little to get excited about as Rosberg took the chequered flag ahead of Hamilton. Vettel rounded off the podium ahead of team-mate Kimi Raikkonen, Bottas, Hulkenberg, Kvyat, Massa, Grosjean and Verstappen.

In a fortnight the final race of the season will be held in Abu Dhabi where thankfully last year’s double points debacle will not play any part.

What did you think of Brazil this year? Leave your comments below.