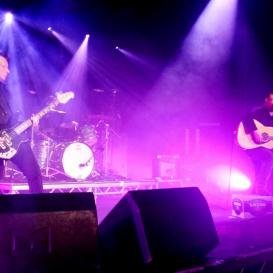 Last Saturday night, 25th April, I was in Cambridge to see Manchester rockers I Am Kloot (not to be confused with Groot from Guardians of the Galaxy!) playing at Cambridge Junction. The band is comprised of John Bramwell (vocals, guitar), Peter Jobson (bass) and Andy Hargreaves (drums). I Am Kloot’s current UK tour follows the release of their latest live album Hold Back The Night. The album consists of 20 tracks across 2 discs, and was recorded on their 2013 tour.

I am Kloot, live performance

I have to admit that I hadn’t heard of I Am Kloot before this tour, so when I was offered the opportunity to go along and review their gig for Kettle I got straight on YouTube to listen to some of their music. And I was pleasantly surprised by what I heard. I Am Kloot are a classic English rock band, and it’s clear to see how other Manchester bands have helped to shape their music. With a gritty tone and sharp lyrics, both Oasis and the Stone Roses are understandable influences. However, some of the songs also particularly reminded me of Liverpool’s Echo and the Bunnymen. Despite this, I Am Kloot have managed to find a niche and develop their own sound, building on the foundations these bands have provided them with.

I Am Kloot. Classy as ever tonight in Cambridge. http://t.co/QGqKoes9qZ pic.twitter.com/OHOdcRP7Nn

The band’s Cambridge gig confirmed this. They played a strong, solid set of mainly newer songs interspersed with a few of the older fan favourites. And bands like this are perfectly suited to the intimacy of venues like Cambridge Junction. A standing only venue, Cambridge Junction combines all the quality of a larger arena with the closeness only smaller venues can achieve, which gives it an intimate personality all of its own. I was lucky enough to be in the front row, right up against the barrier, but people all the way to the back were still able to experience that personal touch. This was helped along by front-man John interacting with the audience by chatting and joking with crowd members in-between songs throughout the gig.

The evening was topped off by support from Andy Burrows (of Razorlight fame). Andy’s slow-rock songs were similarly balanced by his light-hearted joking with the crowd, particularly with his new number one fan Brian. My personal highlight of Andy’s set was his performance of single ‘Light The Night’ from the animated Christmas TV classic The Snowman and the Snowdog.

It was also rare to see such a variety of people at one gig. From groups of students to middle-aged couples, I Am Kloot clearly have wide-ranging appeal. Everyone at the gig was having a great time and joining in with the band. It was particularly fun when John asked the audience to do the accordion and trumpet parts in songs to make up for the lack of actual instruments! A stand-out moment and particular highlight for me was the band’s performance of ‘Northern Skies,’ which was first released as a single from their 2010 album Sky at Night.

Considering this isn’t the type of band I’d normally go and see, I still had a good time and I’m certainly glad I went. But for fans of gritty northern rock music, I Am Kloot are definitely a must see.

Are you a fan of I Am Kloot? Let us know in the comments below!