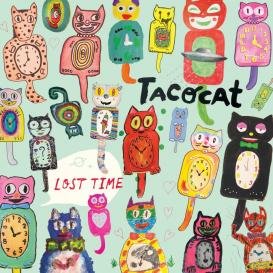 Lost Time is the third album from Seattle’s premier surf-pop quartet, Tacocat. The band has become well-known for their feminist themes and quirky ways of putting them across. ‘Crimson Wave’, one of the singles from their second album, in particular made a period-positive message into a humorous beach anthem – complete with dancing sharks in the video.

This latest album is mightily short. A concise half an hour that, to my slight confusion, meant listening to the whole album three times over whilst on a recent ten-mile training run. Short and punchy then is clearly the aim of the game.

It’s a formula that works well for the band. Rather than feeling under baked or lacking in any way, Lost Time comes across as an explosion of hooks and melodies. ‘Dana Katherine Scully’, ‘I Hate The Weekend’, and ‘I Love Seattle’ in particular show off the light, airy, melodic vocals that make Tacocat so sonically contagious – certainly catchy enough to distract an unfit runner from how much pain he’s in.

In a guitar-music climate that mostly just consists of Catfish and the Bottlemen, Tacocat are wonderfully refreshing. Whilst a lot of bands (Muse) nowadays seem to take vacuous subject matters and treat them very seriously, this band does the opposite – taking tough subjects like mansplaining and making tongue-in-cheek pop songs that could quite easily be whistled or danced to.

‘Men Explain Things To Me’ actually sums up the band in typically succinct fashion. The opening line, ‘Explain it to me’, is sung with glorious levels of sarcasm, enough to make the track a potential feminist anthem, whilst still being set to a lively, upbeat rhythm. The whole thing is endlessly fun – as are the band.

Lost Time is a delightful album. Where most guitar bands feel over-worked and dull, Tacocat are offering new perspectives in a fantastically sunny and carefree fashion.